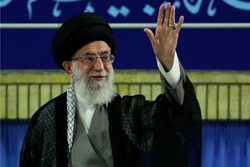 On the occasion of the Muslim festival of Eid al-Fitr, Ayatollah Khamenei pardoned or ‎commuted prison terms of more than 3,700 convicts found guilty by various Iranian courts.

RNA – On the occasion of the Muslim festival of Eid al-Fitr, the Supreme Leader of the ‎Islamic Revolution, Ayatollah Sayyed Ali Khamenei, pardoned or commuted prison terms of ‎more than 3,700 convicts found guilty by various Iranian courts.‎

The pardon was granted at the request of the country’s Judiciary Chief Hujjat al-Islam ‎Sayyed Ebrahim Raeisi.‎

The top judge had proposed the amnesty for 3,721 prisoners.‎

Eid al-Fitr, also called Feast of Breaking the Fast, is an important religious holiday celebrated ‎by Muslims around the world. The observance traditionally begins with the sighting of the ‎new moon of the 10th month of the Islamic lunar calendar. This year, the Eid falls on May ‎‎24 in Iran.‎

Article 110 of the Constitution grants the Leader the right to pardon or reduce the sentences ‎of convicts upon a recommendation from the head of the Judiciary.‎

The clemency, however, does not apply to all types of convicts, including those who have ‎been sentenced for their role in armed struggle against the country, armed or organized drug ‎trafficking, rape, armed robbery, arms smuggling, abduction, bribery and embezzlement.‎