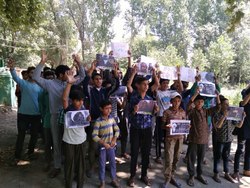 A protest rally ‎was held in Indian-occupied Kashmir to demand the release of Shaykh ‎Ibrahim Zakzaky, the leader of the Islamic Movement of Nigeria. ‎

The rally was peacefully carried out along the Baramullah National Highway between ‎Hanjewera and the Reshipora Patan area in Baramullah District. ‎

The rally was organized by the Hanjewera division of the Nasl-e-Inqilab Kashmir, a voluntary ‎student-based social organization. Hundreds of youth from around the region participated in ‎the rally.‎
‎ ‎
The Free Zakzaky rally was held in support of the world-renowned Muslim cleric and the ‎leader of the Islamic Movement of Nigeria, Shaykh Ibrahim Zakzaky, who was jailed on ‎December 12, 2015 along with his wife. On that day, the Nigerian army massacred 347 ‎members of the Islamic Movement of Nigeria, including three of the sons of Shaykh Zakzaky ‎during a rally marking International al-Quds Day in support of the Palestinian people. ‎
‎ ‎
Shaykh Zakzaky has been under illegal detention for the past fours years and witnesses say ‎that he is in critical condition due to the injuries inflicted upon him in the 2015 attack by the ‎Nigerian army.‎
‎ ‎
The cleric’s son, Muhammad, said that his father was in dire need of medical treatment‎ and ‎hadn’t received treatment in prison. If he isn’t treated, he could die as “large and dangerous ‎quantities of lead and cadmium have been found in his blood.” Therefore, the protestors are ‎demanding release of Shaykh Zakzaky ‎as soon as possible. ‎
‎ ‎
Irfan Husayn, one of the participants in the rally, said, “We have gathered here to demand ‎the immediate release of the Shaykh, for he needs quality medical treatment to treat his ‎injuries. Thus we call on the Nigerian embassy in New Delhi to order the Nigerian government ‎to release Shaykh Zakzaky without any condition.” ‎

The protestors carried placards with various slogans as “Free Zakzaky,” “Down with the ‎Nigerian government” and “Down with the Nigerian Army.”‎
‎ ‎
Wajid Husayn, the leader of the protest rally, said, “We have peacefully assembled here to ‎demand justice for Shaykh Ibrahim Zakzaky, who was detained four years ago and now ‎spending the last moments of living under detention. It’s a great shame for international ‎human rights organizations, such as the United Nations Office for the Coordination of ‎Humanitarian Affairs, the United Nations Human Rights Council and Amnesty International ‎that they haven’t done anything to deliver justice to Shaykh Ibrahim Zakzaky.”‎