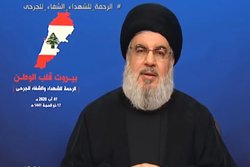 RNA – The important parts of his speech, which ended moments ago, are as follows؛

I had previously said I want to speak to you on Wednesday before the disaster. I wanted to ‎discuss several issues. I wanted to discuss the tensions between Hezbollah and Israeli ‎enemy, Special Tribunal for Lebanon, COVID-19, Lebanon’s fuel shortage. But when the ‎disaster happened on Tuesday, I decided to delay my talk, and I won’t talk about those ‎issues ‎– I’m only talking about Beirut Port Blast.‎

We’re confronting a huge disaster, from a humanitarian and national perspective and by all ‎standards. More than 150 martyrs, most Lebanese, other Syrians, and other nationalities. ‎Thousands wounded. The latest estimates 80 missing.‎

Tens of thousands of families left homeless; properties damaged. The terror that has ‎entered into the hearts of millions.‎

These are serious and dangerous impacts. This will have health, economic impact ‎– Beirut ‎Port nearly totally destroyed and has to be rebuilt, with the economic implications, and this ‎will add to Lebanon’s economic crisis. We’re facing a huge disaster.‎

I extend my condolences to the families of all martyrs. This explosion had a cross-sectarian ‎and cross-region impact. Beirut is the city of all Lebanese, representing all segments of ‎Lebanese society.‎

I ask God to give the families of the martyrs’ patience and succor, and to heal the wounded, ‎and give everyone patience, and to give us the strength to bypass this phase – for all who ‎have been impacted through harm to loved ones or property.‎

This requires the help of God and the cooperation of everyone.‎

Language fails me to express my sympathy and concern for the people of Beirut.‎

We saw many things during this disaster, and I will address them individually.‎

Popular reaction was remarkable ‎– helping the apparatuses of the state to handle this ‎disaster.‎

Blood donations, for example. This was probably the first time Hezbollah asked for ‎donations of blood.‎

This popular solidarity helped in the removal of rubble, search and rescue, and we’re still ‎seeing a lot of volunteering to help.‎

Despite the level of crisis in Lebanon, we saw this high level of solidarity.‎

No one is gloating over anyone else; everyone feels impacted. We have to give high credit ‎to such a reaction, which reveals the deep humanity of our people in all places.‎

For us, as Hezbollah, our entities and apparatuses were present from the first moment, ‎including the municipalities in which we are represented. I reiterate all of Hezbollah’s ‎resources are at the disposal of the Lebanese state and our people impacted by this.‎

We have a lot of experience in housing people after the 2006 War with Israel, and I ask ‎people to take our offer seriously.‎

All families who have lost their housing, we are ready to help them find housing and rebuild. ‎No family should be left in the street or feel like they are a burden on their relatives. We can ‎help secure them with temporary housing until their homes are repaired.‎

In any case, friendly countries have offered aid and we are grateful. Most prominently, ‎French President Emmanuel Macron visited Lebanon.‎

We welcome all such visits to Lebanon, particularly if they increase Lebanese unity. But, at ‎the current stage, we want to look at the positive side of such visits, despite concerns raised ‎by some people.‎

Third, I want to discuss the domestic political scene and a foreign one as well.‎

Often said that living people, even if there are domestic conflicts, they put them aside if a ‎disaster such as this occurs.‎

They set these differences aside until they get past such a disaster, and then they can ‎reopen their disagreements. We even see this during the war ‎– that there’s a ceasefire if a ‎disaster occurs

They at least give each other a few days to allow people to mend their wounds, and figure ‎out how to deal with the fallout.‎

In Lebanon, by contrast, from the first hour of the explosion ‎– when people hadn’t even ‎figured out what happened or who caused it, etc. some local, Arab media and political ‎factions had their story pre-determined that.‎

That what exploded in the warehouse I don’t know what was a Hezbollah arms cache, ‎explosive materials, missiles. Didn’t matter, it just had to be Hezbollah.‎

It didn’t matter to these people that this had been an accident ‎– or that it may have been ‎caused by external actors, jets, missiles, etc. ‎– they wanted to blame Hezbollah for all of the ‎death, destruction, and terror caused by the explosion.‎

This is unfair. Is this freedom of speech? I don’t know. There are those from among our ‎people, Hezbollah’s people, who are martyrs of the Beirut Port explosion.‎

This is an exceptional unfairness. There hasn’t even been an explanation or investigation yet ‎‎– but domestic and Arab media are all fixated on this material belonging to Hezbollah. They ‎adopted the method of lying until they are believed.‎

Some say this isn’t worthy of dignifying with a response.‎

We know how the ammonium nitrates arrived at the warehouse, and I don’t want to spend ‎more time dealing with this.‎

Others took a different approach. Even the US president Donald Trump.‎

talked about a bomb or attack, but even the Americans backed off on this, and the only ‎ones now peddling this are a few media outlets here.‎

That’s because any media outlet valuing any bit of its integrity wouldn’t continue peddling ‎this.‎

Some questioned whether Hezbollah knows more about Haifa port in Israel than Beirut Port. ‎Yes, correct, because as Resistance it is our duty to know what’s going on in Haifa port, but ‎not Beirut Port.‎

Point is to accuse Hezbollah in one way or another. In any case, investigations are underway ‎to determine the facts, what led to the explosion, what was housed at the warehouse, etc.‎

When the truth comes out, I simply ask that people accept the findings. I ask the Lebanese ‎people to judge these media stations, and boycott them for their lies ‎– this is the worst ‎punishment because they are attempting to incite civil war.‎

When you tell hundreds of thousands of people that this specific entity is responsible for the ‎deaths of your loved ones and your losses, what else are they doing?‎

I don’t care to settle political scores right now. This isn’t the time for that. This is the time ‎for solidarity, finding the missing, treating the wounded, returning people to their homes. The ‎country requires compassion, and after that, we can get into political feuds.‎

There is total Lebanese consensus that a fair, transparent investigation must be conducted, ‎and those found responsible must be tried fairly.‎

During the investigation, no one must be allowed to be covered. We shouldn’t do this in the ‎typical Lebanese fashion of giving people passes for their sect, etc. Whoever is responsible ‎must be tried for their actions, not based on their sect, etc.‎

If some Lebanese trust one security agency, and others trust another ‎– let both agencies ‎conduct a joint investigation. But if there’s consensus on LAF’s trustworthiness, let them ‎investigate and reveal findings.‎

I want to add something. Just as this accident is exceptional, how the Lebanese state deals ‎with this issue is fateful.‎

This is a national disaster par excellence. It must not be politicized or made sectarian. This is ‎fateful ‎– it will impact whether the Lebanese people trust the state or have hope in a state ‎being built.‎

If the Lebanese authorities fail in this duty, then there is no hope in building a state. I don’t ‎want to create despair, only to describe reality. We need to work to create this hope.‎

It could emerge that there were jets, and someone came and bombed. But if it turns out ‎this was a matter of negligence, then here’s your war on corruption.‎

But if we can’t deal with this, then we all need to come out and tell the Lebanese people, ‎honestly, that we’re incapable.‎

The truth about this disaster must be determined, without regard to the political party. ‎Otherwise, we have an existential crisis on our hands.‎

‎ There must be accountability and just punishment, so Lebanese officials can give hope to ‎the Lebanese people that a just Lebanese state can be built.‎

‎ By the grace of God, this explosive material was near the sea. Had it been more inland, the ‎disaster would have been greater. This can’t simply be written off as an administrative error.‎

‎ From the heart of the disaster, there are opportunities, though. We need to take advantage ‎of offers of foreign aid and build upon opportunities created by this disaster.‎

I want to say to those who have started a battle with Hezbollah over this disaster ‎– you ‎won’t achieve any results.‎

I tell Hezbollah’s base, do not worry. These people are chasing mirages. Just as they were ‎disappointed in the past, they will be disappointed again.‎

The Resistance is bigger, greater, and more noble than to be taken down by some liars, ‎inciters, and who are trying to start a civil war. They have failed before and will fail again.‎

Mercy upon the dead, may the missing be found. Well-wishes to all who have been harmed. ‎God willing, through collaboration ‎– we will emerge from this stronger.‎