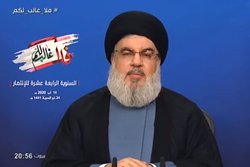 The Secretary-General of Hezbollah said that the President of the ‎United States Donald Trump has already milked some of the Persian Gulf states to serve his ‎Israeli friend Benjamin Netanyahu.‎

RNA – Sayyid Hasan Nasrallah, the Secretary-General of Hezbollah, said that the President of the ‎United States Donald Trump has already milked some of the Persian Gulf states to serve his ‎Israeli friend Benjamin Netanyahu.‎

He made the remarks in a live speech on the occasion of the 14th anniversary of Lebanon’s ‎victory over the Israeli enemy.‎

On 33-Day War against the Zionist enemy

Nasrallah congratulated the Lebanese people on the anniversary of the July War while ‎appreciating all who had a big or small role in achieving this victory.‎

‎“I want to thank, specifically, Imad Moghniyeh and Mustafa Badruddin who were in the ‎central command in directing the war back then,” he said, according to al-Manar.‎

He also offered special thanks to Marty Lieutenant General Qasem Soleymani for his ‎participation in the operations room during the war.‎

He also offered special thanks to martyred Lieutenant General Qasem Soleymani for his ‎participation in the operations room during the war.‎

Lebanon stood alone militarily in its fight against the Zionist army which had been considered ‎invincible, he said, adding, one of the strategic outcomes of the July war was foiling the new ‎Middle East scheme which was the main goal of the war on Lebanon.‎

That New Middle East scheme which started with Afghanistan occupation to the Iraqi invasion ‎was meant to continue but was foiled in Lebanon, added the Hezbollah chief.‎

The military and psychological defeat the Zionists had 14 years ago is still remaining till now, ‎he said, adding that Lebanon is strong with its resistance equation and that’s why the enemy ‎wants to get rid of it.‎

The Resistance, for Lebanon and its people, is a condition for life, it’s not a side matter, it’s ‎existential, he highlighted.‎

We’ve been hearing this since 2000, that if Hezbollah would disarm, the United States, ‎European Union would take us off the Foreign Terrorist Organizations list, support us ‎financially and politically, and make us their best friends, he said, adding, now that war has ‎failed to defeat Hezbollah, they are resorting to every other method, and what we are all ‎witnessing now in Lebanon is a result of that

The Resistance, for Lebanon and its people, is a condition for life, it’s not a side matter, it’s ‎existential, he highlighted.‎

Hezbollah’s decision to avenge the killing of its fighter Ali Kamel Mohsen is still valid and they ‎knew Hezbollah would respond, we didn’t need to say anything, Nasrallah said. “Hezbollah ‎will respond, but the response will be studied and measured, only serious, calculated action ‎not media stunts.”‎

Timing also demonstrates how much Arab regimes serve America and Trump needs an ‎accomplishment before the end of his term, he added.‎

Nasrallah pointed to the defeats that Trump has conceded in the international arena, such as ‎the failure of his policies against Iran, North Korea and Palestine. Trump already milked the ‎Persian Gulf States financially, religiously, and morally just to serve his friend Netanyahu, he ‎said. ‎

Referring to the massive explosion in the Port of Beirut, Nasrallah said that Hezbollah doesn’t ‎have any narrative on the incident. “We are not investigating; the Lebanese state is doing ‎the job.”‎

The incident has happened theoretically due to either negligence or sabotage, he added.‎

Hezbollah is entitled only in resistance security and does not want or have the capability to ‎take over domestic security, he said, adding that if investigations proved the explosion was ‎out of negligence, then those responsible must be held accountable and punished.‎

If investigations proved the explosion was out of negligence, then those responsible must ‎be held accountable and punished.‎

The most dangerous matter is that there’s a project underway to bring down the Lebanese ‎State, said Nasrallah, adding, the scheme’s aim was to rile up political forces’ pressure ‎against President Aoun to force him to resign.‎

The second goal targeted the parliament, through resignations, but it also failed, added ‎Nasrallah. “They are trying to take the country to civil war. They were trying to do that when ‎former Prime Minister Saad Hariri was kidnapped.”‎

‎“Now, regarding the formation of new government, we tell the Lebanese not to listen to ‎those attempting to exploit the disaster to accomplish their political goals. We call for a ‎strong government that has political backing from parliamentary factions, so it can withstand ‎pressure.”‎

A neutral government is ‘a waste of time’ and a ‘fake way’ to bypass the popular will, he ‎said, adding, “So let’s go for a national unity government or one with the broadest possible ‎popular and parliamentary representation.”‎

Through patience and holding onto resistance and its capabilities we will overcome these ‎difficult times.‎

‎“Regarding protests, we’ve seen all boundaries crossed. Who do these people represent? ‎We respect those peacefully protesting not those who are backed by embassies.”‎

He called on Hezbollah supporters to be ‘patient’ and not let go of their anger as the day ‎might come when “we need it to end all attempts to drag Lebanon into civil war.”‎

‎“Through patience and holding onto resistance and its capabilities we will overcome these ‎difficult times.”‎