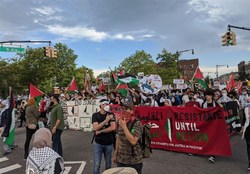 Hundreds of protesters marched through streets of New York to voice opposition to Israeli annexation plans in the West Bank and the continued occupation of Palestinian territory.

RNA _A huge crowd of demonstrators gathered in Brooklyn for Wednesday’s ‘Day of Rage’ rally, where marchers were seen carrying an array of flags and banners while shouting slogans for a “free Palestine.”

The gathering grew throughout the afternoon, according to local reporters at the scene, who estimated that some 2,000 people turned out for the rally. Though there were no reports of clashes with law enforcement, riot police were present, trying and failing at one point to corral protesters to one side of the street.

Dozens of speakers from local organizations as well as an anti-Zionist Orthodox Jewish organization were also present at the event carrying elaborate signs and placards.