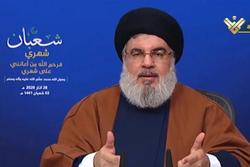 Secretary General of the Lebanese resistance movement Hezbollah Sayyed Hassan Nasrallah says the repercussions of the coronavirus (COVID-19) pandemic may go beyond those of the world wars and result in a new global order.

RNA - Secretary General of the Lebanese resistance movement Hezbollah Sayyed Hassan Nasrallah says the repercussions of the coronavirus (COVID-19) pandemic may go beyond those of the world wars and result in a new global order.

In a televised speech Saturday evening, Nasrallah said the world is undergoing a new experience “unparalleled for two centuries" with its fight against the highly contagious virus.

He urged elites and thinkers to observe the major changes caused by the fast-spreading respiratory disease, whose “repercussions may be greater than the First and Second World Wars” and cause “a new world order.”

The Hezbollah chief further raised questions about the future of the US and the EU as a result of the crisis.

“We do not know whether the United States will remain united or whether the European Union will remain, and there is debate about the healthcare systems in the world and about the economic capitalist system.”

The epidemic has confused the world and caused fatalities, Nasrallah said, underlining the need to learn a lesson from what is happening around the globle.

Nasrallah also referred to the confusion that the administration of US President Donald Trump is experiencing in terms of its contradictory positions in the face of the coronavirus outbreak.

“This small virus has so far imprisoned three billion people in their homes. Wouldn't that require us to stop and contemplate our inability to comprehend it?” he asked.

The new coronavirus initially emerged in China late last year and is now spreading across the globe. Worldwide, there have been more than 664,100 confirmed cases of the virus and over 30,880 deaths.

Elsewhere in his speech, Nasrallah called for a safe and calculated return of Lebanese nationals stuck abroad.

"There should be no negotiation on whether or not Lebanese people should return to the country," he said, calling on the government to urgently make a decision in this regard.

The coronavirus has so far killed eight people and infected 412 others in Lebanon, where the government has extended the nationwide lockdown period until April 12.

Nasrallah called for cooperation between Lebanese citizens and institutions to contain the disease, saying, “People should not leave the government alone to deal with this issue.”

He further criticized the Association of Banks for donating only $6 million to the Lebanese government to fight the virus, saying the amount is very minimal compared to the body’s financial capacity.

Meanwhile, the Hezbollah chief hailed the steadfastness of the Yemeni people in the face of the 5-year Saudi war on their country and renewed his call for the Riyadh regime to halt its aggression amid the coronavirus pandemic.

He also commended a recent offer by the leader of Yemen’s Houthi Ansarullah movement to free several Saudi captives in exchange for the release of Palestinian prisoners in the kingdom.