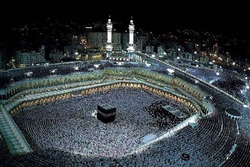 Turkey says its first cases of the new coronavirus were detected among those returning from Saudi Arabia, accusing Riyadh of concealing the number of patients among pilgrims.

RNA - Turkish Interior Minister Suleyman Soylu said the first cases of coronavirus were confirmed in pilgrims who had returned to the country after performing the Umrah pilgrimage in Mecca, Umrah, a lesser pilgrimage compared to the annual Hajj, involves a visit to Saudi Arabia where Islam's holiest site Kaaba is located.

"Saudi Arabia did not inform us or the world about any cases," Turkey’s state-owned Anadolu news agency quoted Soylu as saying.

"People returned from Umrah [lesser pilgrimage]. The health ministry took measures right after the first case was observed and put the pilgrims in isolation centers," he added.

In an effort to contain the spread of the virus, Turkey quarantined more than 10,000 pilgrims upon their return from Saudi Arabia.

On Thursday, Turkey announced 16 new deaths from Covid-19, bringing the total number to 75.

Turkey’s Health Minister Fahrettin Koca said the total number of infections had reached 3,629, after 7,286 tests were conducted on Thursday.

Turkey has taken a raft of measures aimed at curbing the spread of coronavirus, from shutting schools and universities to banning mass prayers.

The government has also postponed matches in its main sports leagues indefinitely, as well suspending flights to many countries. The Turkish Interior Ministry has also announced that grocery store and supermarket hours will be limited to between 9 am and 9 pm, with a maximum of one customer for every 10 square meters of shop space.

Turkish authorities have ordered everyone aged 65 and over as well as those with chronic illnesses to stay at home, while most public spaces have been temporarily closed.

Meanwhile, Saudi Arabia tightened restrictions on religious gatherings outside two main mosques in the holy cities of Mecca and Medina on Thursday in an attempt to prevent the spread of a new wave of coronavirus in the country.

So far, Riyadh has recorded 1,102 cases of the virus and three coronavirus-related deaths.

The new coronavirus, which causes a respiratory disease known as COVID-19, is believed to have first emerged in the central Chinese city of Wuhan in Hubei Province late last year. It has been reportedly contained in China, but is spreading rapidly around the globe.

More than 533,000 people worldwide have so far been infected with the virus and over 24,000 have died, according to a running count by www.worldometers.info.

As the rate of transmission of the new coronavirus shows no signs of slowing, many countries have adopted severe measures to contain the outbreak, including imposing lockdown measures and closing businesses and borders, as well as limiting public gatherings.