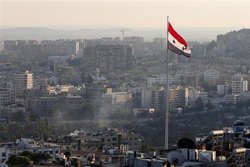 Syria blasted “inhuman sanctions” imposed by the United States against a number of countries, raising the alarm that the restrictive measures are hampering global efforts to contain the coronavirus pandemic.

The diplomatic missions of Russia, China, Iran, Syria, North Korea, Cuba, Nicaragua, and Venezuela sent the letter to the UN chief on Wednesday, calling for the removal of the US sanctions and warning about their negative impact at a time when the international community was struggling to fight the flu-like pathogen.

They stressed that the sanctions also had a direct impact on “the human rights to life, health and food of the peoples subjected to them”.

“We believe that the letter sent by these countries to the secretary-general of the United Nations, to the Security Council … has shown the very correct approach to finding solutions to the present difficult dangerous situation of the international community in all countries of the world, which means that these inhuman sanctions should stop immediately,” Mekdad told Sputnik news agency.

“At this time, as the world faces a joint epidemiological and economic crisis due to the coronavirus outbreak, sanctions were harming efforts to combat a global pandemic,” he added, saying, “Unilateral coercive measures play a very negative role in finding the necessary solutions.”

The Syrian deputy foreign minister also called for global cooperation, instead of the restrictive measures, to curb the coronavirus spread.

“This situation we are all facing, necessitates cooperation among countries of the world, not sanctions that affect the lives of poor people in particular and help the disease to spread everywhere,” Mekdad noted.

Since 2011 when foreign-backed terrorism started to plague Syria, the United States, the European Union and some Arab states have imposed draconian sanctions on the country over its non-existent chemical stockpile.

Damascus surrendered its stockpile of chemical weapons in a process monitored by the United Nations and the Organization for the Prohibition of Chemical Weapons (OPCW) in 2013.

According to Fars News Agency, the United States has declined to remove sanctions on the Arab country amid the coronavirus outbreak and despite global calls on Washington to do so.

On Thursday, the Russian mission to the United Nations announced in a statement that the UN Security Council would convene on Monday to discuss the ongoing situation in Syria as the Syrian Health Ministry confirmed four new COVID-19 cases, raising the total number of confirmed cases to ten in the war-wracked country, including one fatality.

Syria has delayed parliamentary elections, shut schools and canceled most public events to top the spread of the virus in the country.

More than 787,000 people worldwide have so far been infected with the novel coronavirus, and nearly 38,000 have died.