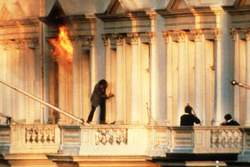 On May 1st, Iran commemorated the fortieth anniversary of the occupation and siege of its ‎embassy in London, United Kingdom by a group of Iranian Arab terrorists. ‎

RNA – Five days after the defeat of the American-led attack on Iran to liberate the hostages ‎taken by the Muslim Students Following the Imam’s Line and Operation Eagle Claw (also ‎known as Operation Tabas), five armed men occupied the Iranian embassy in London and ‎took all twenty Iranian employees of the embassy hostage.‎

Time of the Attack: 11:30 ‎am on May 1, 1980‎
‎Location: 16 Prince’s Gate, South Kensington, London‎
Number of terrorists: Six people who introduced themselves as the Democratic ‎‎Revolutionary Front for the Liberation of Arabistan (DRFLA), an Iranian Arab terrorist group ‎founded in 1979. ‎
Number of hostages: 26 employees and clients of the Iranian embassy‎
Period of hostage-taking: Six days (April 30 to May 5, 1980)‎

The nature of terrorists: The terrorists were born in Iraq and had Iraqi passports. They ‎applied for visas as Iraqi nationals and entered the United Kingdom without any question ‎about the purpose of their trip, according to court documents.‎

The terrorists’ demands: The release of 91 Arab prisoners from Iranian prisons, their own ‎safe passage out of the United Kingdom, for them to join the hostages and official ‎recognition of the national rights of the Khuzestani Arab people by the Iranian government.‎

In order to successfully carry out the rescue operation, the Special Air Service (SAS), a ‎special forces regiment of the British Army, while receiving a guarantee of judicial immunity ‎from the consequences of their actions, as well as adequate life insurance coverage, were ‎allowed to shoot without restrictions and kill anyone they saw fit.‎

The Prime Minister of the United Kingdom, Margaret Thatcher, stressed that all hostages ‎must be kept alive and that all hostage-takers must be killed! The killing of two terrorists ‎who were only guarding the hostages is one of the unsolved puzzles.‎

After that on the sixth day,‎‏ ‏the hostage-takers dumped the body of an Iranian diplomat ‎outside the building and the operation began earlier than expected. The whole rescue ‎operation lasted only 15 minutes after SAS forces stormed the embassy.‎

After the incident, Iranian President Abolhasan Banisadr defended the need to release the ‎American hostages immediately, prompting Margaret Thatcher to take advantage of the ‎situation and write letters to Imam Khomeyni and Banisadr to release the American ‎hostages.‎

In a part of her letter to Imam Khomeyni, Prime Minister Thatcher wrote: “I call on Imam ‎Khomeyni to order the release of American hostages in order to show goodwill to the brave ‎men who risked their lives to free the Iranian hostages and to thank God for protecting the ‎safety of the Iranian hostages.”‎

John Graham, the British ambassador to Iran, expressed London’s official condolences to the ‎Iranian government over the hostage-taking, the occupation of the embassy and the killing ‎of two diplomats. In response, President Banisadr sent a message of thanks to Prime ‎Minister Thatcher.‎

Martyrs and Wounded by the Hostage-Takers: Two Iranian diplomats, Dr. Abbas ‎Lavasani (Chief Press Officer) and Ali-Akbar Samadzadeh (a temporary employee at the ‎embassy), were killed, and Gholam-Ali Afrouz-Kardar (Embassy Chargé d’Affaires) and Ali ‎Dadgar, the embassy’s local translator, were wounded by the armed hostage-takers.‎

The Fate of the Terrorists: Five terrorists were killed. A young man named Fawzi ‎Badawinejad, the only surviving hostage to the accident, was released because he hid among ‎the hostages, who were later identified and arrested outside the embassy compound.‎