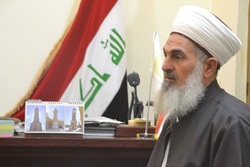 He also urged the new premier to strive to resolve issues and problems such as those ‎related to unemployment, refugees, prisoners and university graduates.‎

The senior cleric further called for efforts to expel the United States forces from the country.‎

The vote came two days after the United States military – acting on United States President ‎Donald Trump’s order – launched a fatal drone strike on senior Iranian anti-terror ‎commander Lieutenant General Qasem Soleymani upon his arrival in the Iraqi capital at the ‎invitation of the Baghdad government.‎

The attack also claimed the lives of Abu Mahdi al-Muhandis, the second-in-command of the ‎PMU, and eight other Iranian and Iraqi people.‎

Washington has threatened sanctions should United States troops be expelled instead of ‎heeding the Iraqi parliament’s call to end the occupation of the country.‎

Director of Islamic Seminaries of Qazvin:‎