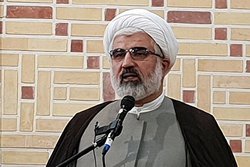 Hujjat al-Islam Sobhaninia noted the presence of jihadi seminarians in the cemeteries to ‎perform the funeral rites and said, “The jihadi actions of the young seminarians reduced the ‎misfortunes of this virus.”‎

RNA – In an exclusive interview with Rasa News Agency, Hujjat al-Islam Mohammad-Taqi ‎Sobhaninia, the director of Islamic Seminaries of Qazvin, said that it is possible to turn the ‎threat of COVID-19 (Coronavirus) into an opportunity with intelligence. “Some succumb to ‎negative thoughts in the face of tribulations and simply fail.”‎

His Eminence added that threats, including the harm of the Coronavirus, allowed us to better ‎identify our weaknesses and work to strengthen them.‎

He said, “Since the beginning of the victory of the Islamic Revolution, the people have tried ‎to turn all threats into opportunities and this is the lesson they have learned from the Islamic ‎Revolution.”‎

He said that eight years of Holy Defence [Iran-Iraq War] had given birth to the Iranian ‎military’s force and added, “The Imposed War with the Ba’ath Party was a threat of which ‎the proper usage of it placed Iran on the side of the world’s top military powers.”‎

Hujjat al-Islam Sobhaninia referred to the enemies’ oppressive sanctions over the past ‎several recent years and said, “The correct confrontation with these sanctions caused the ‎country to progress in various dimensions and achieve self-sufficiency.”‎

His Eminence said that the Coronavirus is a public threat to the worldwide community, “This ‎threat has caused people to come to the forefront and come to the aid of their fellow ‎human beings with benevolence and faithful empathy.”‎

He pointed to the jihadi services of the seminaries against the Coronavirus and added, “The ‎seminaries understood their mission well from the beginning of the outbreak of the ‎Coronavirus and young seminarians in all provinces rushed to the aid of the people with ‎various measures in the fields of propaganda, culture and health.”‎

Hujjat al-Islam Sobhaninia noted the presence of jihadi seminarians in the cemeteries to ‎perform the funeral rites and said, “The jihadi actions of the young seminarians reduced the ‎misfortunes of this virus.”‎

Referring to the connection between the medical staff of the hospitals and the jihadi ‎seminarians, he said, “The moral, spiritual and intimate relationship created between the ‎medical staff and the seminarians has no precedent.”‎

Hujjat al-Islam Sobhaninia stated that the seminaries have always been with the people in ‎their problems and said, “The medical staff in the hospitals felt the impact of the presence ‎of the clergy in reducing the burden of the Coronavirus.”‎

Head of the Islamic Seminaries of Iran: