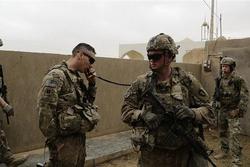 Iraq’s Badr organization, which is part of the country’s Popular Mobilization Forces or PMU, ‎says the US and Saudi Arabia are seeking to reactivate Daesh, adding that recent attacks by ‎the Takfiri terrorist group serve that aim.‎

The latest deadly terrorist attacks, which were conducted on Iraqi soil with the US and Saudi ‎backing, were part of a plot to bring Daesh back, he added.‎

Bayati also noted that renewed US-Saudi support for Daesh is similar to that of 2014, when ‎the Takfiri outfit unleashed a campaign of death and destruction in Iraq and overran vast ‎swathes in lightning attacks.‎

He further raised concerns about possible terrorist attacks in the provinces of Salahuddin, ‎Kirkuk and Anbar.‎

Early on Saturday, Daesh terrorists mounted a coordinated assault in the Salahuddin town of ‎Makishfah and the city of Balad, killing at least 10 PMU fighters.‎

The Popular Mobilization Forces said its forces had killed and wounded a number of Daesh ‎elements and managed to push them back in the area.‎

‎"It is with great sadness, we received news of the martyrdom of a group of heroes from ‎among the PMU who died defending their homeland in the face of ISIL (Daesh) attacks in ‎the Makshifah and Balad areas north of Baghdad."‎

In the early days of the Daesh’s reign of terror, PMU fighters played a major role in ‎reinforcing the Iraqi army, which had suffered heavy setbacks against the Takfiri elements.‎

In November 2016, the Iraqi parliament voted to integrate PMU into the military in amid US ‎efforts to sideline the group.‎

Some of the equipment used by Daesh elements were new, he said, adding that most terror ‎groups entered Iraq from Syria after the US facilitated their passage.‎

The fresh Daesh attack comes at a time when American forces are required to leave Iraq ‎based on a parliamentary resolution approved in January following the US assassination of ‎senior Iranian anti-terror commander Lieutenant General Qasem Soleymani.‎

The US has not only defied calls to withdraw from Iraq, but also reinforced its military ‎presence there by deploying troops and equipment.‎

The US has recently started evacuating its occupation forces from a number of military ‎bases in Iraq under a new redeployment plan.‎

Iraqis believe the move is a military tactic amid reports that Washington is drawing up plans ‎to target PMU commanders.‎