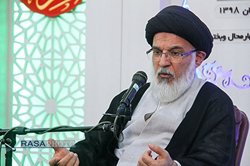 The eminent teacher in the Islamic Seminaries of Qom said, “The most dangerous ‎phenomenon in the post-Coronavirus world is for the great powers to take human society ‎into the realm of virtual governance.”‎

RNA – Speaking during a meeting to justify and explain the programs of the holy month of ‎Ramadhan which was held in the presence of a number of imams of Qom mosques on April ‎‎21st, Ayatollah Mohammad-Mahdi Mirbaqeri considered some of the claims of hands behind-‎the-scenes and conspiracy theories regarding the outbreak of COVID-19 (Coronavirus) to be ‎possible and said, “Some powers designed this dangerous conspiracy to use the opportunity ‎created by the outbreak of‏ ‏‎ the Coronavirus. The First and Second World Wars were also ‎created with the conspiracies of some countries, after which the international community ‎accepted the plan for lasting peace and the formation of a new government with the ‎establishment of the United Nations.”‎

The eminent teacher in the Islamic Seminaries of Qom said, “There is a strong possibility ‎that in the post-Coronavirus world, more dangerous consequences than the formation of the ‎United Nations and the establishment of world order after the world wars awaits human ‎societies and that is the virtual governance (e-government) of the world – meaning the ‎complete domination of internet technology in the world.”‎

He emphasized that many of the protocols announced by the World Health Organization ‎‎(WHO) have dangerous consequences, “Our country's medical community is trustworthy but ‎the WHO isn’t as trustworthy as other UN agencies. Many colonial projects are implemented ‎by these organizations around the world.”‎

Ayatollah Mirbaqeri stated that in every area where Muslims resisted, the world powers ‎failed, saying, “They imposed an eight-year war [Iran-Iran War] on us, and after September ‎‎11th, they created Daesh, but they failed and we became stronger.”‎

His Eminence stressed the need to implement major plans to counter this conspiracy of the ‎superpowers and added, “The global conspirators want to downplay, invalidate and ‎transform religion. Therefore, the mosque and the religious delegations must not penetrate ‎the modern state.”‎

He emphasized on the need for the Islamization of governance to change the administration ‎of society on the basis of religion and said, “The mosque must become a centre that casts a ‎shadow over all areas of society. The mosque must be the axis of the social life of society ‎and the congregational prayer leaders (imams) must prepare their congregations for great ‎deeds.”‎

In conclusion, Ayatollah Mirbaqeri said: “The community of believers won’t succumb to ‎virtual governance and this plan of the world powers will fail.”‎

Arba’in is the clear manifestation of human and divine dignity

The Infallible Imams are the treasurers of divine secrets