The Infallible Imams are the treasurers of divine secrets 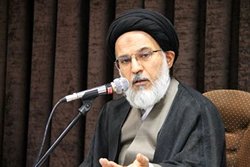 The renowned teacher in the Islamic Seminary of Qom stressed that the infallible Imams are ‎the treasurers of divine secrets and said, “Bearing the secrets of religion needs a heart which ‎is a container of truth and pay their price.” ‎

RNA – Speaking at a Muharram mourning ceremony held at Qom’s Feyziyeh Seminary, ‎Ayatollah Sayyed Mohammad-Mahdi Mirbaqeri said, “As mentioned in the Holy Quran, ‎أُوتُوا الْعِلْمَ‎ ‎‎‘those who were given knowledge’ are those who engaged in private counsel with the ‎Prophet Muhammad and have taken the secrets of divine planning from him and they must ‎be central to the thinking and plans of the believers.”‎

The head of the Islamic Sciences Academy in Qom said that the hypocrites engaged in ‎private counsel with the Prophet in order to gain social status, said, “If the gatherings of the ‎believers aren’t focused on ‘those who were given knowledge,’ the gathering will become the ‎gathering of the whispering of the devils.”‎
‎ ‎
Ayatollah Mirbaqeri stated that the Prophet Muhammad transferred the secrets of the ‎formation of the Islamic society to Imam Ali and stated, “Bearing the secrets of religion ‎needs a heart which is a container of truth and pay their price.” ‎

The representative of the people of Alborz province in the Assembly of Experts referred to ‎the abrogated command in the Holy Quran regarding giving charity in order to engage in ‎private counsel with the Prophet and said, “The command to give charity is meant to ‎separate ‘those who were given knowledge’ and the bearers of the secrets of religion from ‎others.”‎

He said, “Under difficult circumstances, the infallible Imam can change everything with one ‎supplication but because he is the treasurer of the secrets of God, he is patient.”‎