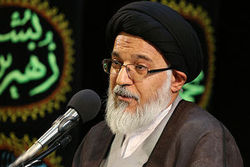 Ayatollah Mirbaqeri said, the resistance put up by Iran will lead to the collapse of the US and those with western orientation are preparing the grounds for the fulfillment of the purposes of the West.

RNA - Ayatollah Mirbaqeri said, the resistance put up by Iran will lead to the collapse of the US and those with western orientation are preparing the grounds for the fulfilment of the purposes of the West.

The representative to of the Assembly of Experts described the economic war as the last battle against the West and Liberal Democracy and said, certainly the resistance of Iran will lead to the economic collapse of the US.

Ayatollah Sayyed Mehdi Mirbaqeri, the representative of Alborz to the Assembly of Experts, delivering the pre-sermon speech of Qom Friday Prayer in Quds Musalla, recited some verses of Quran and then said, a concept commonly mentioned by Quran on the events happened after the departure of the prophet, is “piling up (the good things of this world)”.

He added, “The sublime God appointed the prophet and the Right Imams so that the Islamic society would be formed based on imam pivot, and if it is formed so, people will enjoy full Heavenly blessings. The enemy puts up the means of debauchery and pilling up in order to busy the people with mundane affairs, to make them ignore the Heavenly blessing.”

Ayatollah Mirbaqeri stated, “Those with western orientation prepare the grounds for the fulfillment of the purposes of the West inside the world of Islam, we approve of development, but not of modernity”.

Saying that, “our revolution is different from the October and French revolutions”, he stated, “Imam directed our revolution differently towards victory, presented this new method to the world community and formed a soft power against the West”.

Finally he said, “We are the rival of the Western civilization, therefore we should stand against it. We shouldn’t let the West dominate and threat us using the international documents such as 2030. Our final war against the West and Liberal Democracy will be the economic battle”.