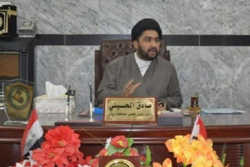 The Popular Mobilization Forces’ intelligence official in Diyala governorate announced on ‎Monday the formation of a precautionary force to fight Daesh in Diyala.‎

RNA – Hujjat al-Islam Sayyid Sadiq al-Husayni, the person in charge of information of the Popular Mobilization ‎Forces in Iraq’s Diyala governorate, announced on Monday the formation of a precautionary ‎force against Daesh in Diyala.‎

He added, “The Popular Mobilization Forces are present in large and extensive areas in ‎Diyala, most of which have a very complex topography, and some of them were until ‎recently considered inflamed areas and centers due to Daesh’s activities.” ‎

But the situation has changed since the deadly blows to Daesh and the deaths and injuries of ‎a number of Daesh leaders.‎

Hujjat al-Islam al-Husayni stressed that the precautionary force has an excellent ability to carry out difficult ‎missions.‎

He said, “The Popular Mobilization Forces are fully prepared to help any force if necessary, ‎for security.”‎

It is worth mentioning that Diyala governorate has recently witnessed a series of Daesh ‎attacks.‎