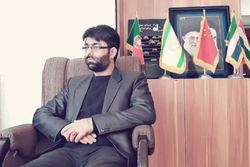 A Kashmiri seminarian said that Imam Khomeyni awakened the conscience of humanity to ‎the issue of Palestine and made people aware of the atrocities of Zionism.‎

RNA – In an exclusive interview with Rasa News Agency, Sayyed Karar Hashmi, a Kashmiri ‎seminarian in Qom, praised International al-Quds Day, which was initiated by the late Imam ‎Khomeyni, the founder of Iran’s Islamic Revolution in 1979, as an annual event held on the ‎last Friday of Ramadhan to show support for the Palestinian people and to oppose Zionism ‎and all of the arrogant powers. ‎

The Kashmiri scholar said, “Israel is a wound that was inflicted on the Islamic world by the ‎Zionists and the arrogant powers and this wound has been made deeper on a daily basis. ‎Palestine has been facing some of the worst human rights violations. The Muslim world must ‎unite instead of playing into the hands of Western powers. al-Quds Day is a day in which the ‎destinies of the oppressed nations must be determined.”‎
‎ ‎
Sayyed Hashmi added that Imam Khomeyni awakened the conscience of humanity to the ‎issue of Palestine and made the people aware of the atrocities of Zionism. Due to this ‎initiative, every year hundreds of thousands of people participate in the rallies in support of ‎defenceless Muslims, especially Palestinians, across the globe. ‎

He noted that al-Quds (Jerusalem) is the first qiblah of Muslims and it belongs to Muslims ‎and added, “There is no disagreement among any of the Islamic jurisprudents that if a single ‎part of the Muslim territories is ruled by the enemies of Islam, all Muslims must consider it ‎their duty and obligation to make determined efforts to restore that territory.”‎
‎ ‎
He emphasized that those who have been imprisoned in Palestine must not feel they are ‎alone and added, “The men and women who are being attacked by the Zionists on the ‎streets of al-Quds, the Gaza Strip and other Palestinian cities are not alone because we will ‎stand with them until the last drop of our blood.”‎
‎ ‎
Sayyed Hashmi called upon the United Nations, the leading world body, to declare Palestine ‎an independent state with al-Quds as its capital, to immediately dismantle all of the illegal ‎Israeli settlements surrounding al-Quds and in the West Bank, to release thousands of ‎Palestinians, including a large number of women and children languishing in Israeli jails, to ‎declare Israel a terrorist state and bring its officials to the International Court of Justice for ‎their crimes and punish it accordingly. ‎

In conclusion, he added, “This year, due to the COVID-19 (Novel Coronavirus) pandemic, ‎people across the world must use social media networks to mark the day in support of the ‎defenceless Palestinian people.” ‎