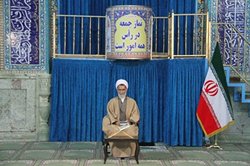 Ayatollah Nekounam stating that al-Quds belongs to Islam and humanity, said, “al-Quds Day ‎is a day for the world to pay attention to the oppression and homelessness of many human ‎beings.”‎

RNA – Hujjat al-Islam Mohammad-Ali Nekounam issued his weekly statement via the internet ‎in place of the cancelled Friday prayer sermon to the people of Shahrekord.‎

Friday prayers have been cancelled in Shahrekord and many other cities throughout Iran due ‎to the outbreak of COVID-19 (Coronavirus) to prevent the spread of the Coronavirus and ‎maintain the health of the people. ‎

He expressed his condolences on the martyrdom anniversary of Imam Ali and said that ‎charity and helping the poor is one of the prominent features of this Imam and also referred ‎to the Layali al-Qadr (Nights of Power) and said, “We have two Nights of Power behind us, ‎but we must not neglect the night of the 23rd of Ramadhan and the third Night of Power, ‎because this night is the peak of the Nights of Power and very virtuous.”‎

The representative of the Supreme Leader of the Islamic Revolution in Chaharmahal and ‎Bakhtiari province referred to the last Friday of the holy month of Ramadhan and ‎International al-Quds Day and said, “This year, the type of encounter with al-Quds Day is ‎much different from previous years and programs will be held as a car parade, in which ‎everyone must play their part in this great jihad.”‎

Ayatollah Nekounam stated that al-Quds Day is a day for the world to pay attention to the ‎oppression and homelessness of many human beings and added, “The people of the world ‎and the Muslims must not allow the liberals to legitimize their work and continue their ‎malicious work.”‎

His Eminence stated that al-Quds belongs to Islam and humanity, “After the Islamic ‎Revolution, the further we went, the more united al-Quds Day was, and the Muslims showed ‎their capacity.”‎

He said that this year the tribune of the expressive voice is in the hands of the Muslims ‎noted said, “This year, all ears and hearts are turning to this axis and transformational pole ‎and liberals and the arrogant powers are waiting for their masters and agents to hear their ‎statements.”‎

Ayatollah Nekounam said that those who are on the Islamic Resistance Front must be heard ‎and prepared. These words are authoritative for this front and added, “This year, the ‎Supreme Leader of the Islamic Revolution has made important statements that must be ‎heard and those who must flee must be ready as soon as possible. The seeds of despair will ‎be planted in their hearts forever and the call for the liberation of al-Quds will be heard ‎soon.”‎

Representative of the Supreme Leader in Chaharmahal and ‎Bakhtiari:‎