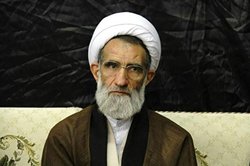 Hujjat al-Islam Nekounam referred to the role of Major General Qasem Soleymani in the ‎elimination of Daesh and said, “Today, the blood of this martyr will certainly provide the ‎basis for the permanent elimination of the United States.”‎

RNA – Speaking this afternoon at a ceremony in commemoration of Martyr Haj Qasem ‎Soleymani in Shahrekord, Hujjat al-Islam Mohammad-Ali Nekounam, the representative of ‎the Supreme Leader of the Islamic Revolution in Chaharmahal and Bakhtiari province, said ‎that the martyrdom of the great commander of Islam saddened everyone and said, “Today, ‎the Iranian people and the Islamic Resistance Front have hatred for the United States and ‎Israel in their hearts and this hatred will eventually take them by their necks.”‎

Hujjat al-Islam Nekounam stated that all of the people are awaiting hard revenge for the ‎blood of Major General Soleymani and added, “This revenge will undoubtedly take place ‎during its proper time because the promises of the Supreme Leader of the Islamic ‎Revolution are heavenly promises that will surely come true.”‎

His Eminence emphasized that the life of the Islamic Revolution is due to the blood of these ‎martyrs and noted, “Faithful people were created to ascend to the heavens and Martyr ‎Soleymani has achieved his dream of martyrdom.” ‎

He pointed out that unity and empathy are the most important needs of the country today, ‎added, “Unfortunately, some people mean unity around political factions, while in the view ‎of Martyr Soleymani, unity should only be centred around God Almighty.”‎

Hujjat al-Islam Nekounam emphasized that resistance against sedition was the most ‎important demand of Major General Soleymani for the people and noted, “Only through the ‎shadow of resistance can the United States and Israel be removed from the face of the ‎world.”‎