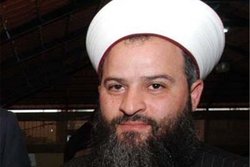 Member of Lebanese scholar assembly said, “The US is seeking to misuse the peaceful rally of Lebanese people to divide the country and make sedition.”

In an interview with RNA international correspondent, pointing to the last situation of Lebanon, Sheikh Kidr al-Kabsh, Member of Lebanese scholar assembly, said, “Unfortunately Lebanon’s situation is not good and people with seemingly rightful demands come to the streets but they encounter new problems in process of the demonstrations.”

“By making sedition and division among Lebanese people, US is seeking to make civil war in Lebanon but Resistance Front (Hezbollah) is aware like always and will neutralize their plan”, he noted.

Pointing to inability of enemies of Lebanon to actualize their evil schemes, Sheikh Kidr al-Kabsh said, “We tell the US mercenaries and its supporters that they can never reach their evil goals. By killing innocent people, Benjamin Netanyahu is seeking his gone reputation among Zionist politicians but the situation for him is not like what it was before and thanks to the Resistance Front all of equations in the region have been changed.”

“The power of the Resistance Front has significantly increased and in recent years we have seen no one can defeat it”, Sheikh Al-Kabash concluded.