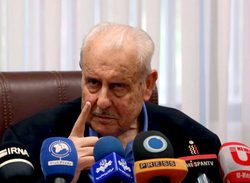 The Palestinian ambassador to Iran said, “The leader of the Islamic Revolution of Iran is the flag of jihad and martyrdom. Soon we will see the destruction of Israel.”

In an interview with RNA international correspondent, Palestinian Ambassador to Iran Salah Zawawi, referring to the latest developments in the region said, “According to the Imam Khomeini, Israel is in decline and we have no doubts about this issue.”

“As long as Ayatollah Khamenei, the supreme leader of the Islamic revolution in Iran is the role model for Jihad and martyrdom, Israel will be annihilated”

Stating that we Muslims should not repeat the mistakes of Andalusian Muslims, the Palestinian ambassador to Iran said, “Muslims were able to stablish an Islamic state in Spain, but some Islamic leaders wanted the Westerners to help suppress their opponents and this issue destroyed the Islamic State in Spain.”

“Islamic unity is one of the major, fundamental and great goals of Muslims in which the Islamic Republic of Iran is the leader. So, it annually holds conferences and seminars in this field”, he continued.

Salah Zawawi at the end appreciated all those who maintain the line of Jihad and martyrdom, especially Ayatollah Khamenei.