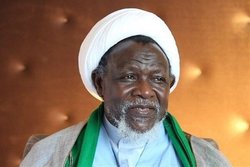 RNA - “In the past years, and due to the [Nigerian] army’s cruel measures, Sheikh Zakzaky’s health condition has been severely undermined,” Omar said in a meeting held in Tehran on Sunday, attended by a number of the top cleric’s family members and relatives.

Referring to the recent transfer of Sheikh Zakzaky and his wife to a dilapidated prison, the doctor said, “This is a prison where many detainees have so far died due to lack of medical attention.”

“Sheikh is suffering from lead poisoning,” he added.

The cleric’s daughter, Soheila Zakzaky, who was also present at the session, said after four years from the Zaria incident, the justice has not been served yet.

“The Nigerian government is seeking to slowly murder the Sheikh,” she said.

Back in 2015, the Nigerian security forces raided the city of Zaria, during which they detained Sheikh Zakzaky, who is in his mid-sixties. The raid left more than 300 of his followers and three of his sons dead. The Sheikh lost one of his eyes; his wife also sustained serious injuries.

A High Court ordered the Department of State Services on Thursday (December 5) to transfer the cleric and his wife, Zinat, to the Correctional Center in Kaduna state, northwest of the country.

Members of the Islamic Movement in Nigeria (IMN) said on Thursday that any attempt to take the couple anywhere other than a hospital will put them in further jeopardy.

According to Fars News Agency, the IMN said the facilities at the Kaduna Central Prison are dilapidated, adding that it was the same prison where some survivors of the December 2015 raid perished due to a lack of medical attention.

Earlier this year, the IMN accused the Nigerian government of having poisoned Zakzaky in jail after “large and dangerous quantities of lead and cadmium have been found in his blood”.

In August, Dr. Pourrahim Najafabadi, MD, said Sheikh Zakzaky needs to be cured by an experienced medical team of physicians in a specialized multi-specialty hospital outside Nigeria, since there is no such medical center in the African country.