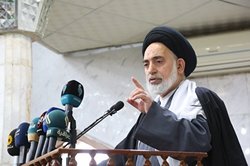 Hujjat al-Islam Qobanchi Najaf Friday Prayer leader warned against the active presence of terrorist groups in the soft war and called for Prayer Imams to confront the enemies in this area.

According to the correspondent of Rasa News Agency in Najaf Ashraf, in a meeting with Imams of Iraqi Mosques in Imam al-Mahdi Mosque in Najaf, Hujjat al-Islam Sadreddin Qobanchi, the Friday prayer leader of the city, described the religious way as the best way of political governing and stated, “In Western countries the government is ruled based on political coalitions and parties and despite of the elections, it has led to the dominance of the parties over the governments.”

He pointed to the Arabic and Islamic governments as the other way of ruling systems and said, “Such governments are based the military coups and revolutions and the government hereditarily passes from generation to generation.”

“Islamic political government ruling is based on Ahl al-Bayt (A.S) and the source of emulation teachings during the Al-Ghaybah al-Kubra (Major Occultation)”, Qobanchi added.

Meanwhile he pointed to the Soft War issue and said, “Middle East countries, especially Iraq are confronted with the soft war. After overcome to DAESH terrorist group in military war, the soft war has started. In such war, the enemies fight through electronic tools and by which one can employ tens of thousands without the permission of the target country.”

Qobanchi emphasized on getting armed in the soft war and said, “The mosques are the first fronts for leading the Islamic Ummah and preaching, Imam Hussain teachings, Friday and congregation prayer sermons are the best places for confronting the enemies in the soft war.”