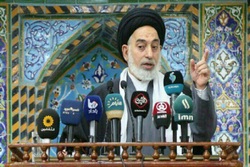 RNA – In his Friday prayer sermon delivered to a large and fervent crowd of believers ‎in the ‎Iraqi city of Najaf’s Fatimah al-Kubra ‎Husayniyah, Hujjat al-Islam Sayyid ‎Sadruddin al-‎Qubanchi, while welcoming the upcoming trips of the Iraqi Prime Minister ‎Mustafa al-Kadhimi, during which he will be visiting the Islamic Republic of Iran, ‎emphasized the necessity for American troops to withdraw from Iraq.‎

His Eminence said, “The prime minister’s trip to Saudi Arabia, Iran and the United ‎States is a positive step that must emphasize the need not to interfere in Iraqi affairs ‎and the withdrawal of American troops.”‎

He stressed that Iraq isn’t looking for hostility with any country but rather, it wants to ‎coexist peacefully with all neighbouring countries and the world.‎

Hujjat al-Islam al-‎Qubanchi noted, “Mustafa al-Kadhimi’s visit to several Iraqi cities, ‎including Karbala and then Basrah, was a positive step in that direction, and Iraqi ‎citizens feel the impact of these trips.”‎

His Eminence added that the project related to border crossings and preventing the ‎entry and exit of goods without supervision is also a positive step and this project must ‎be implemented successfully and all political groups must act in the interests of the ‎government.‎

Regarding the success of the Iraqi security forces in killing one of the leaders of the ‎Daesh terrorist group known as the Daesh governor of Baghdad [Ahmad Isa (Abu ‎Talhah)], he said, “I thank the security forces for carrying out this courageous ‎operation.”‎

Hujjat al-Islam al-‎Qubanchi added, “There is no return for Daesh, and this terrorist ‎group is experiencing defeat in Iraq and it is not possible for Iraq to become a takfiri ‎state. There is peaceful coexistence among all Iraqi groups.”‎