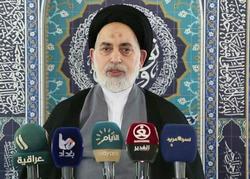 Hujjat al-Islam al-‎Qubanchi emphasized that the attack on the Shi’ah religious authority ‎‎[Ayatollah al-Sistani] is clear and obvious.‎

RNA – In his Friday prayer sermon which delivered which was delivered online from Najaf due ‎to the spread of COVID-19 (Coronavirus), Hujjat al-Islam Sayyid Sadruddin al-‎Qubanchi said, ‎‎“The attack on the position of the Shi’ah religiou authority [Ayatollah al-Sistani] is clear. Recently, the Sharq al-Awsat ‎newspaper carried an insulting cartoon and today, an insulting banner addressed to Imam ‎Khamenei was raised in Baghdad’s Tahrir Square.”‎

He stated, “We know that the freedom of the media doesn’t allow disrespect for the people ‎and their sanctities and what the Sharq al-Awsat newspaper has done demonstrates hostility ‎towards the Ahl al-Bayt and the deviation from the identity of the media.”‎

He continued, “What is being stated in Tahrir Square is the politicization of demonstrations ‎and unacceptable work and this indicates the presence of hands that want to keep the ‎demonstrators away from their goals.”‎

Hujjat al-Islam al-‎Qubanchi stressed the need to counter air military exercises that take place ‎in the skies of Baghdad and over people’s homes and added, “This action will violate the ‎sovereignty and frighten the people and isn’t in line with any international memorandum or ‎strategic agreement. What does Baghdad mean by military experience?”‎

Referring to the electricity crisis, which was accompanied by severe heat waves and ‎blackouts in the country, His Eminence added, “We hold not only the Ministry of Electricity ‎responsible but also the government responsible for these actions.”‎

He noted, “We assure the Iraqi government that embracing the United States will keep the ‎country limited forever. The security situation and the series of assassinations pose various ‎dangers to this country, so who will be next after the assassination of Hisham al-Hashimi?”‎

al-Hashimi was an Iraqi historian and researcher in security and strategic affairs and extremist ‎groups, and a specialist on Daesh and its supporters. He also was an advisor to the Iraqi ‎government on counter-terrorism. On 6 July 2020, he was seriously wounded outside his ‎home in Zayounah, Baghdad from an attack by two unknown gunmen on a motorcycle. He ‎died in ibn al-Nafis Hospital shortly after arrival.‎