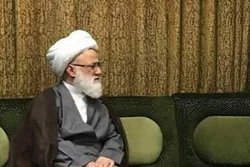 Accordig to the correspondent of Rasa News Agency in Najaf Ashraf, in a speech in al-Rahman mosque in Iraq, Sheikh Heidar al-Azirjavi, one of Ayatollah Yaqubi’s representatives said, “As you know, ayatollah Yaqubi has called for considering a day as the International Chastity Day and best time for this event is the birthday of Lady Zeynab (A.S).”

“In Karbala event, despite enduring many calamities including martyrdom of her family especially her brother Imam Hussain (A.S), Lady Zeynab (A.S) kept completely her veil and chastity and turned to a role model for this issue”, al-Azirjavi added.

“Ayatollah Yaqubi had said in a meeting with the youth that the Hijab is not just for women and is not just covering the body, but also it has a more general meaning and includes keeping hand, eye and tongue away from sins”, Ayatollah Yaqubi’s representative outlined.

Lady Zaynab bint Ali, was the daughter of the Imam Ali ibn Abi Talib and Ldy Fatimah. Prophet Muhammad was her maternal grandfather, and thus she is a member of his household. She is considered to be a figure of sacrifice, strength, and piety in both the Sunni and Shia sects of Islam.

During Karbala event, she played an important role and because of this, she became known as the “Heroine of Karbala”. Lady Zaynab died in 681 CE, and her holy shrine is located in Damascus, Syria.