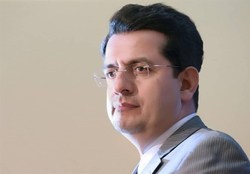 Iran has dismissed the latest claims by US Treasury Secretary Steven Mnuchin that Washington's unilateral sanctions on Tehran are the alternative to military confrontation, saying sanctions are indeed a full-fledged war targeting civilians.

RNA - In an interview with CNBC’s Hadley Gamble at the Doha Forum in Qatar published on Saturday, Mnuchin said sanctions like those on Iran are used in order to avoid potential war.

“The reason why we’re using sanctions is because they are an important alternative for world military conflicts. And I believe it’s worked,” he said, adding, “So whether it’s North Korea, whether it’s Iran or other places in the world, we take the responsibility very seriously.”

The US Treasury Department said later on Friday that Washington's newly-announced sanctions targeting Iran's air and maritime transport industries will lead to the restriction of trade related to humanitarian goods.

"US persons will be prohibited from engaging in transactions involving Islamic Republic of Iran Shipping Lines (IRISL) or E-Sail, including transactions for the sale of agricultural commodities, food, medicine, or medical devices," the Treasury's guidelines on Iran sanctions read.

Tensions have soared between Iran and the US since last May, when President Trump pulled Washington out of the 2015 nuclear deal between Tehran and the P5+1 group of countries consisting of the United States, the UK, France, Russia, and China plus Germany, and reimposed the sanctions that had been lifted under the deal, officially known as the Joint Comprehensive Plan of Action (JCPOA).

In response, Iran has so far rowed back on its nuclear commitments four times in compliance with Articles 26 and 36 of the JCPOA, but stressed that its retaliatory measures will be reversible as soon as the European signatories — France, Britain and Germany — find practical ways to shield mutual trade from the US sanctions.

Speaking at a weekly cabinet session in Tehran on Wednesday, Iranian President Hassan Rouhani said his administration is determined to surmount the sanctions against the country through different means but will not compromise its red lines.

“We should either bypass the sanctions or compel the enemy to repent, and the administration is determined to frustrate this plot (sanctions) both through boosting domestic production and other different means like negotiations,” Rouhani said. “But in doing so, the administration will act in line with the establishment’s red lines and will not cross them.”