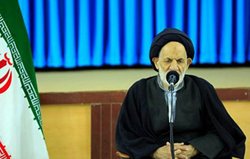 Hujjat al-Islam Ebadi said, “The American system hasn’t only put its foot on the throats of ‎African-Americans but hasn’t allowed people to breathe easily anywhere in the world.”‎

RNA – In a meeting with the doctrinal-political heads of the forces deployed in South ‎‎Khorasan province, Hujjat al-Islam Sayyed Alireza Ebadi, the representative of the ‎Supreme ‎Leader of the Islamic Revolution [Ayatollah Khamenei] in South Khorasan ‎province, referred ‎to American Human Rights Week and said, “Everywhere that the United States has entered in ‎the world, it has prevented people from breathing and this is not just for the African-‎Americans in the United States.”‎

Hujjat al-Islam Ebadi said, “In this view, the formation of a fake Zionist state is in support of ‎the oppressed Jewish nation and the expulsion of the Palestinian people and the usurpation ‎of the people’s homeland is the same as justice.”‎

His Eminence emphasized that in this degenerate school, the occupying terrorists are ‎considered ‎freedom fighters and fighters of Hamas and Islamic Jihad are considered as ‎terrorists.‎

He stated, “In the eyes of American human rights, ‎Iran’s efforts for peaceful energy will ‎jeopardize American security but the falsification and ‎formation of the brutal Daesh, al-‎Nusrah Front and al-Qaedah Takfiri terrorist groups is considered as support for world ‎‎peace.”‎

Hujjat al-Islam Ebadi continued, “Surprisingly, all of this is given to the people of the world in ‎a glaze of art and literature and attractive media effects and various news, reports and ‎analyzes and if there is a need to cover up assassinations, threats, attacks, and crimes, ‎public opinion will be diverted by camouflage, boycotts, censorship, and deviant news.”‎

His Eminence said, “Although the ‎disenfranchisement of human rights from the perspective ‎of American sovereignty and ‎Zionism has more of an external appearance, the truth is that ‎the first victims of the Western ‎liberal democratic marionettes have been the American ‎people throughout its 200-year history.”‎

Hujjat al-Islam Ebadi added, “Even today, different segments of the ‎American people, ‎especially African-Americans and people of colour, cannot breathe under the yoke ‎of the ‎boots of arrogant and their cries have resonated all over the world.”

Representative of the Supreme Leader in South Khorasan:

The enemies’ sedition was defeated in two days

The enemies never hesitate to strike at Shi’ism

The representative of Birjand in the Islamic Consultative Assembly:‎

Overcoming the economic war is possible with through boosting production‎

The slogan ‘Down with America’ defeated the enemies