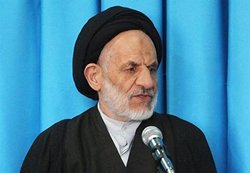 Hujjat al-Islam Ebadi said, “The enemies are brainwashing the thoughts and minds of the youth through cyberspace and therefore, we need to raise the awareness our youth and control the true cyberspace.”

RNA – Speaking at a conference of cyberspace activists in South Khorasan, Hujjat al-Islam Sayyed Alireza Ebadi, the representative of the Supreme Leader of the Islamic Revolution in South Khorasan province said, “The presence of the people in the 22 Bahman [11 February] rallies was on the path of Islamic ideals.”

The Friday prayer leader of Birjand said, “Humans are cultural beings and if we can make this culture healthy, the enemies can be trapped anywhere and the most important thing is making the principle point of society healthy and this is the ideal of the Islamic Revolution.”

He added, “The propaganda attempts of the enemies’ is to stop the word of the Islamic Revolution and Islam from being spread to other societies and officials must take hold of cyberspace from the enemies.”

His Eminence pointed out that the officials must solve the problems of society so that poverty doesn’t impede cultural development because illness and suffering will create difficulties for human beings more than financial poverty.”

He said, “In cyberspace, the enemies are brainwashing the thoughts and minds of the youth and therefore, we need to raise the awareness our youth and control the true cyberspace.”