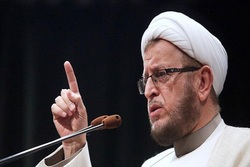 Hujjat al-Islam Nu’mani said the Coronavirus pandemic has had many negative impacts but one ‎of its positive outcomes is making human beings aware of their weaknesses.

The Iranian Cultural Centre in Beirut, Lebanon, organized the event on Friday.‎

Entitled, “Coronavirus: Disputations on Salvation,” it was the third such meeting in a series ‎held ‎under the name of “Coronavirus Debates.”‎

Hujjat al-Islam Nu’mani said mankind that has become conceited in modern times is now ‎weak in the face ‎of a tiny virus.‎
‎
“The pandemic has awakened human beings and many have realized that in such conditions ‎praying ‎and faith in God can help them,” he said.‎

The cleric also noted that in some European countries where broadcasting the adhan (call to ‎prayers) ‎was banned, the ban has been lifted during the pandemic because they have ‎realized the ‎importance of faith.‎

Elsewhere in his remarks, the cleric referred to the belief in a saviour and said, “Nations have ‎always ‎sought a saviour during times of hardship.‎"‎

The concept of a saviour has been present in all religions but Islam has clearly explained it ‎and its ‎purpose, the cleric went on to say, referring to verse 5 of Surah al-Qasas (28) of the ‎Quran: “And ‎We desired to show favour unto those who were oppressed in the earth, and to ‎make them ‎examples and to make them the inheritors.”‎

Member of the Movement for the Advancement of Lebanon: