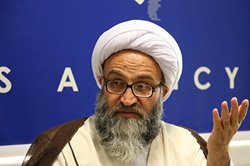 Ayatollah Mohsen Heydari considered the “Deal of the Century” an illegitimate seed that was born dead and said, “Islamic Iran never has and never will give up on the cause of al-Quds.”

RNA – In an exclusive interview with Rasa News Agency, Ayatollah Mohsen Heydari, the representative of the people of Khuzestan province in the Assembly of Experts, said that US President Donald Trump unveiled his shameful “Deal of the Century” with evil motives and said, “He has done this in order to cover up his successive failures in the region.”

Referring to the IRGC’s strong slap against the criminal United States, the Iranian scholar continued, “By unveiling the disgraceful Deal of the Century, Trump sought compensation for his successive failures in the region and is working to rebuild his fragile and lost glory.”

His Eminence described the "Deal of the Century" project as an illegitimate seed that was born dead and said, “Depriving the Palestinians of their homeland and sending them elsewhere and destroying the intifada is nothing more than a fantasy. No Palestinian is willing to leave his land and go elsewhere.”

He emphasized that the waves of resistance around the world have been strengthened today and the Palestinians don’t feel lonely and aren’t intimidated by these shameful plans and added, “Today, all the fronts of the Islamic Resistance, including in Lebanon, Yemen, Iraq, Syria and Iran, are standing alongside Palestine, and they won’t leave it alone to the enemies.”

Ayatollah Heydari pointing out that Islamic Iran has never and never will give up on the cause of al-Quds (Jerusalem), said, “The duty of the Islamic world, especially the Arab countries, is to stand with the oppressed Palestinian people and thwart the enemies’ plots.”