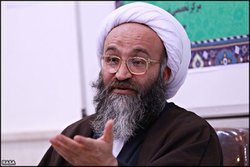 Ayatollah Heydari, referring to the actions of the judiciary in the fight against corruption, said, ‎‎“Dealing with the corrupters, especially important individuals, is a source of hope and shows ‎the general health of the Islamic system.”‎

RNA – In an exclusive interview with Rasa News Agency, Ayatollah Mohsen Heydari, the ‎representative of the people of Khuzestan province in the Assembly of Experts of the ‎Leadership, explained that the existence of corrupt elements and financial, economic and ‎moral corruption in any system (divine and non-divine, democratic and dictatorial) is natural ‎and noted, “We say that naturalness is because human beings are trapped in carnal ‎pleasures, lust and greed and that any of these individuals may be seen in the body of such ‎a system.”‎

He pointed out that during the time of the Messenger of God [Muhammad] there were ‎corrupt people in the Islamic system and clarified, “The Holy Prophet dealt with such people. ‎During the caliphate of Imam Ali, we also witnessed that he dealt with corrupt people, but in ‎non-divine systems, there is no procedure to deal with corruption.”‎

Ayatollah Heydari said, “Since the nature of non-divine systems is often corruption, there is ‎no incentive to deal with minor cases of corruption unless they pursue the issue of ‎corruption in line with the eradication‏ ‏of some people.”‎

His Eminence stated that corrupt regimes have accepted and nurtured corruption and have ‎no negative feedback on it and added, “Since the Islamic system has divine roots, it has ‎proven since its inception that whenever it notices corruption, it will deal severely with it in all ‎faculties, even the clergy.”‎

Ayatollah Heydari continued, “In the Islamic system, the corrupt are held accountable in ‎whatever clothes and position they are in, although the encounters and inquiries suffer from ‎severity and weakness.”‎

His Eminence added, “When the head of one of the faculties is a revolutionary, he is ‎definitely more sensitive to corruption and shows a quick reaction and we are currently ‎witnessing such reactions in the judiciary.”‎

Ayatollah Heydari stated, “Dealing with the corrupters, especially important individuals, is a ‎source of hope and shows the general health of the Islamic system.” ‎
‎
Rasa News Agency ‎

Iranian-Islamic Pattern of Justice in the Politics