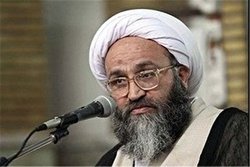 RNA – Speaking at the Holy Shrine of Imam Ali al-Ridha in Mashhad, Ayatollah Mohsen ‎Heydari, the representative of the people of Khuzestan province in the Assembly of Experts, ‎referred to the personality of Martyr Major General Qasem Soleimani and said, “The ‎personality of Martyr Soleimani and other martyrs of the Islamic Resistance are the ‎evidence of the following verse of this Holy Quran, ‘Among the faithful are men who fulfill ‎what they have pledged to God: there are some among them who have fulfilled their pledge, ‎and some of them who still wait, and they have not changed in the least’ [33:23]. ‎

The Iranian scholar added, “Although this verse of the Quran was revealed for Amir al-‎Muminin [Imam Ali], it encapsulates all seekers of the path of martyrdom, including Martyr ‎Soleimani . This commander demonstrated himself as a commander of a life of jihad, ‎obedience to wilayah (guardianship) and loyalty to the school of Islam and he longed for ‎martyrdom and achieved his dream.”‎
‎ ‎
He stated that in the history after the late Imam Khomeyni, the presence and ‎commemoration of the people is unique and added, “The people attended the funeral and ‎commemoration of the Martyr Soleimani in such a magnificent manner because he is a ‎symbol of Islamic resistance and Islamic resistance is a symbol of the Islamic ummah.”‎

Ayatollah Heydari considered Islamic resistance as the key to achieving dignity, freedom and ‎independence and said, “The Islamic ummah, with the guidance of Imam of the ummah and ‎the Supreme Leader, concluded that only through resistance and efforts to cleanse Palestine ‎and the destruction of the criminal United States and the Zionist regime, can we achieve ‎independence, progress and dignity and the Islamic ummah can’t regain its dignity except ‎through cleansing and liberating al-Quds (Jerusalem).”‎

His Eminence called Martyr Soleimani a prominent symbol of the Islamic Resistance and ‎said, “The Islamic ummah has symbols and Martyr Soleimani was one of these symbols. He ‎spent a lifetime in jihad in the way of God from his youth and adolescence, responded to the ‎Imam [Khomeyni], participated on the battlefields during the Imposed War [Iran-Iraq War] ‎and took command of various operations including taking command of the Quds Force to ‎liberate Palestine, Iraq, Lebanon, and Syria from the enemies and the Takfiri movement and ‎strove for the sake of his nation alongside the people of different countries to provide ‎security which was provided by the blood of the martyrs who defended the holy shrines.”‎
‎ ‎
He cited many plots to remove Martyr Soleimani from the hearts of the people by the ‎United States and its agents and added, “Hundreds of assassination plots were plotted for ‎him but none of them succeeded. Martyr Soleimani performed a great service for the ‎Iranian and Iraqi people and the Ahl al-Bayt and prevented the crimes of the United and ‎eliminated Daesh. He was worthy to be martyred by the most wretched person on earth, ‎Donald Trump.”‎
‏ ‏
Ayatollah Heydari emphasized that the blood of Martyr Soleimani led to many blessings for ‎the Islamic world and added, “The martyrdom of Martyr Soleimani in this way and quality ‎led to a huge change and many blessings in the Islamic world that can’t be imagined, ‎including two important decisions in Iran and Iraq that led to the end of the Joint ‎Comprehensive Plan of Action (JCPOA) and opened the way for progress and the Resistance ‎Economy in the country. It also led to the approved of a draft bill requiring the Iraqi ‎government to ask Washington to withdraw American troops from the country.”‎