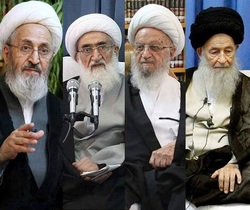 On February 21, alongside people, Ulama and Islamic scholars participated in parliamentary election and midterm election for Assembly of Experts.

RNA - On February 21, nationwide parliamentary election was held in Iran for 11th time and midterm election for Assembly of Expert was held in some parts of the country.

Here we review the speech of the scholars during casting their votes in ballot boxes all over the Iran, especially in holy city of Qom.

Casting his vote in 11th parliamentary and midterm Assembly of Experts elections in mobile ballot box number 563 in Qom, Ayatollah Makarem Shirazi considered the February 21 as a blessed and landmark day for the Iranian nation and demand all people by participating in the elections don’t leave the Islamic republic alone in current hard situation.

Appreciating the hard works of the authorities and officials who held the elections, the source of emulation after casting his vote in a short speech demand people of all walks of life to participate in elections. 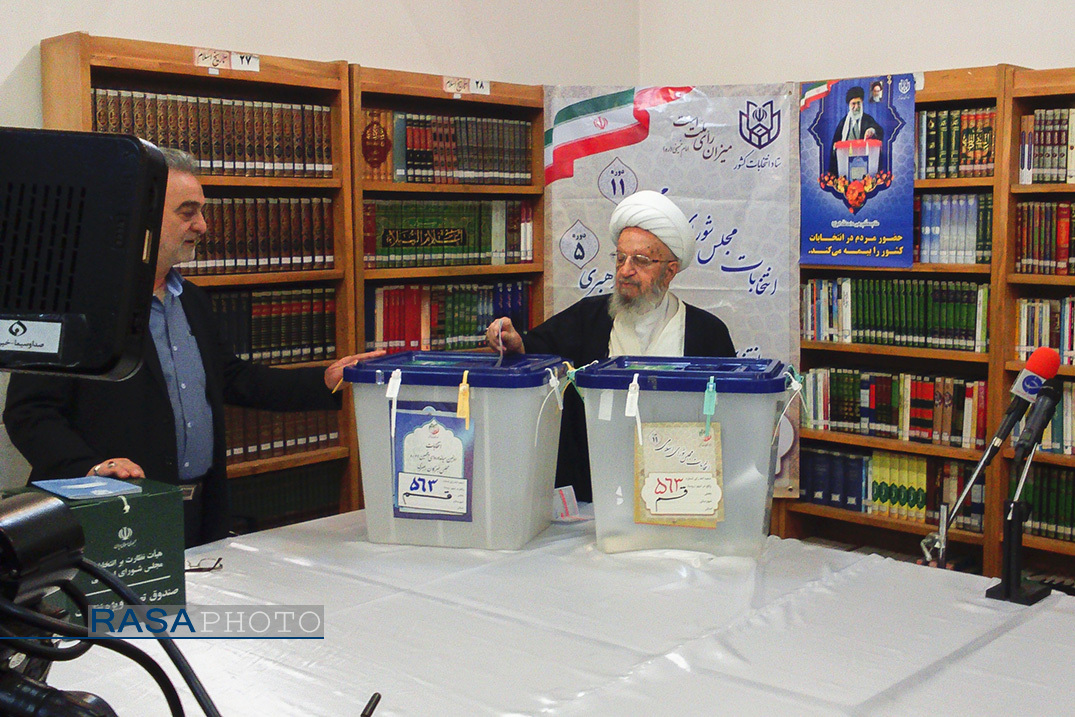 “Today is blessed and landmark day for the Iranian Nation. People will add another golden page to their honor book and they let the enemies down.”

“Thanks to God, Iranian nation enjoys intellectual growth and take responsibility for the (Iranian Islamic) system and know they shouldn’t leave alone the Islamic Republic in current harsh situation”, the source of emulation reiterated.

Ayatollah Nouri Hamedani:
Iranian people protect and strengthen the country by participating in the elections

Casting his vote in the 11th parliamentary and midterm Assembly of Experts elections in Qom, Ayatollah Nouri Hamedani said, “It is imperative to preserve the Islamic republic of Iran and the elections are the manifestation of religious democracy. Iran is the country of the Imam Mahdi and everyone who has faith in the Imam, must participate in the elections.”

“Thanks to God, today, Iranian system is Islamic, which is at the height of power and is based on religious democracy”, the prominent lecturer in the Qom seminary said. 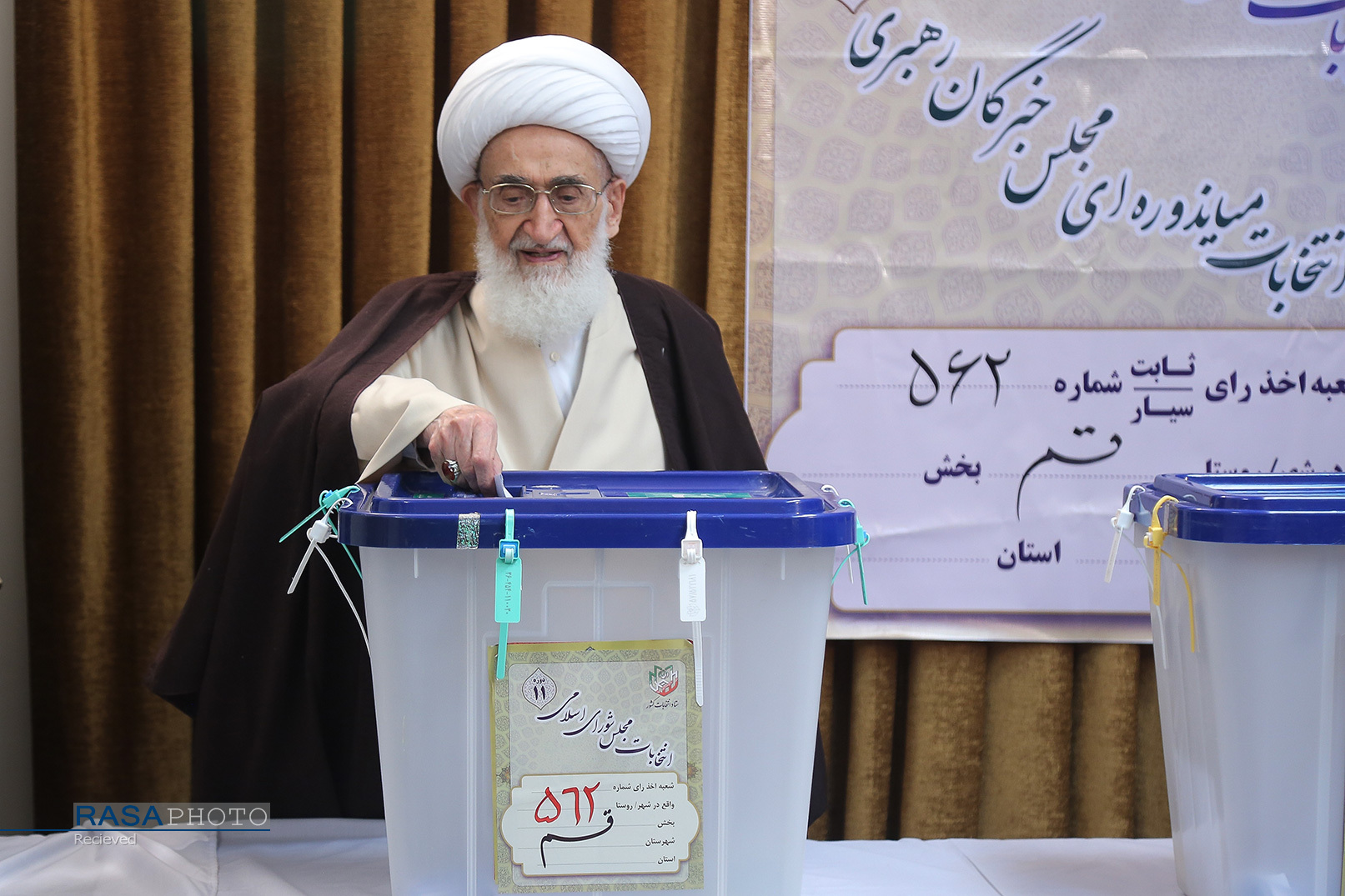 “Iranian pious people have passed great experiments and today they should participate in elections and cast their votes. Our duty is to preserve this Islamic, religious and democratic system until the Reappearance of Imam al-Mahdi”, the source of the emulation added.

“It is necessary for all people to participate in the elections and strengthen their country (Islamic Republic of Iran)”, his eminence stated.

Ayatollah Alavi Gorgani:
Majlis is a place for serving people | people should vote for virtuous candidates

Ayatollah Alavi Gorgani cast his ballot in the 11th parliamentary and midterm Assembly of Experts elections and said, “In the elections, people should consider their duties from different aspects.” 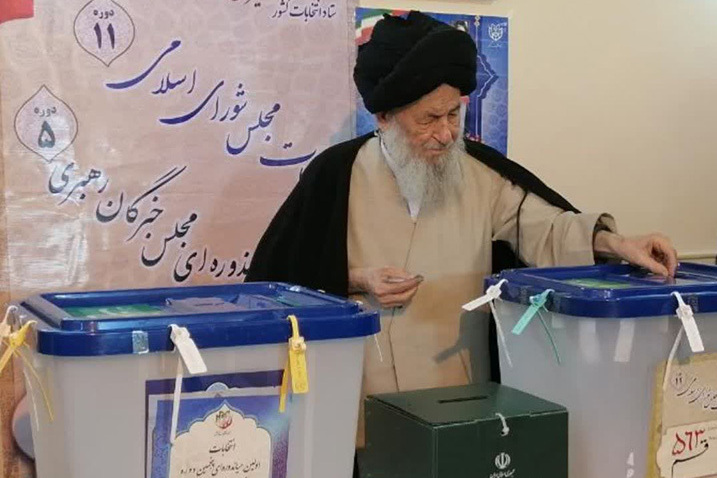 “Based on Quranic verses, God the Almighty always protects whom are pious and serve people”, his eminence added.

“People should vote for those who serve the society and are virtuous.”, the prominent lecturer for the Advanced Seminary courses at Qom seminary concluded.

Ayatollah Jafar Sobhani, a source of emulation, participated in the 11th parliamentary and midterm Assembly of Experts elections and cast his ballot in mobile ballot box number 563.

During casting his ballot, the source of emulation said, “Preserving the (Islamic Republic) system is a religious obligation. One of the pillars of the system is the Majlis (Iran’s parliament) and the participations in its election should be fervent.”

“We hope people to vote for virtuous, knowing, wise and capable candidates so they can solve the problems and we can see Ideal perfection for our country (Iran)”, his eminence added.

Ayatollah Amini:
Participation in the election is a religious and national duty

Ayatollah Amini, a member of the Expediency Discernment Council, cast his ballot for the 11th parliamentary election (Majlis) and midterm election for Assembly of Experts in Qom. 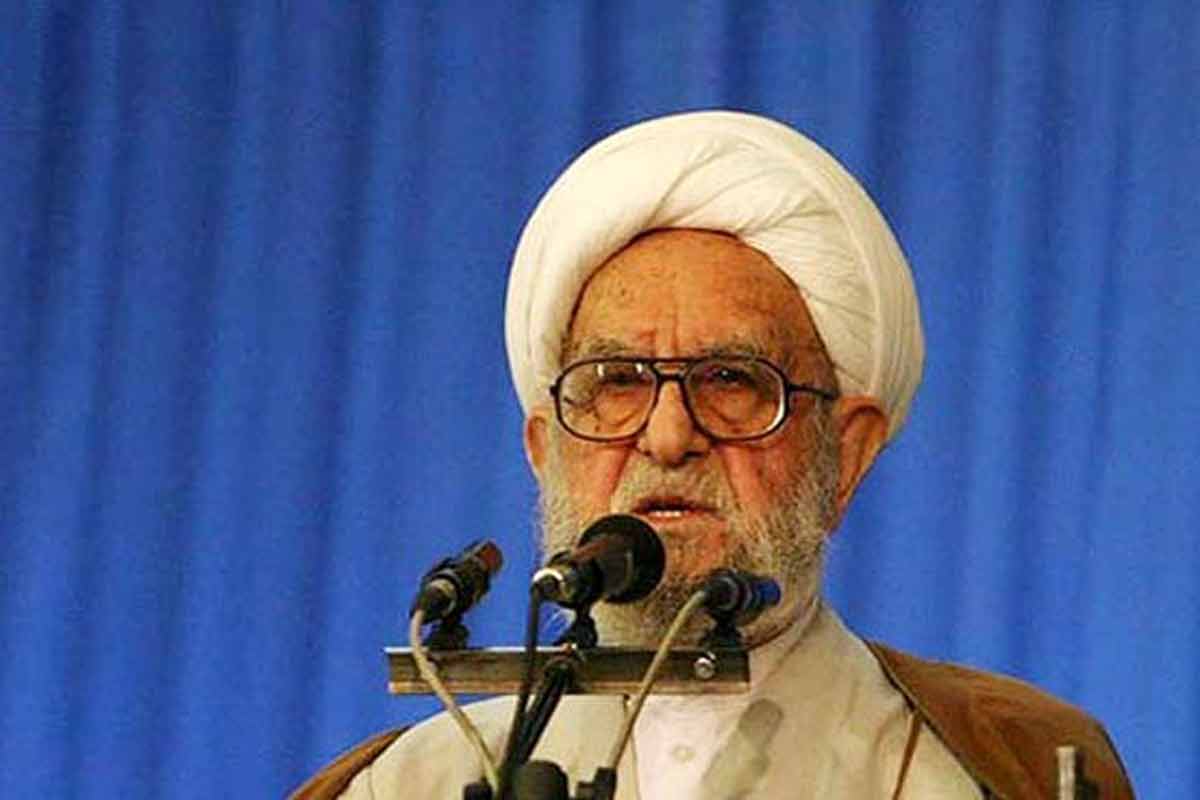 Ayatollah Amini emphasized that is advice to the elector and the elected is to do their duties because the participation in the election is an obligatory religious duty.

Ayatollah Sa’idi:
With their votes, the people will again thwart the enemies’ conspiracy

Speaking after casting his vote in the eleventh term of the Islamic Consultative Assembly election and midterm of the fifth term of the Assembly of Experts election, Ayatollah Sayyed Mohammad Sa’idi referred to the passionate presence of the people in the various stages of the history of the Islamic Revolution and said, “The people have always thwarted the enemies’ plans and conspiracies through their presence at these religious and political occasions.” The Friday prayer leader of Qom highlighted the participation of the people in determining their fate as the view of the late Imam Khomeyni and the Supreme Leader of the Islamic Revolution [Ayatollah Khamenei] and said, “The Islamic Consultative Assembly is the tracklayer of the progress and authority of the Islamic system and the people are well-aware of this.”

Ayatollah Sa’idi noted the differences between the Islamic Revolution and the Pahlavi regime in determining the fate of society and emphasized that despite the passionate presence of the people at the critical junctures of the Islamic Revolution, the enemies have always added to their hostility and added, “In spite of these hostilities, the people’s motivation to participate in different arenas is doubled.”

Ayatollah Tabasi:
People must vote for those who don’t have a heart for the West

Ayatollah Najmoddin Tabasi, a member of the Society of Seminary Teachers of Qom, emphasized the necessity for the widespread participation of the people in the February 21st legislative election in Iran and said, “The people must feel a sense of duty in relation to their presence at the ballot boxes and mark the fate of the system.” 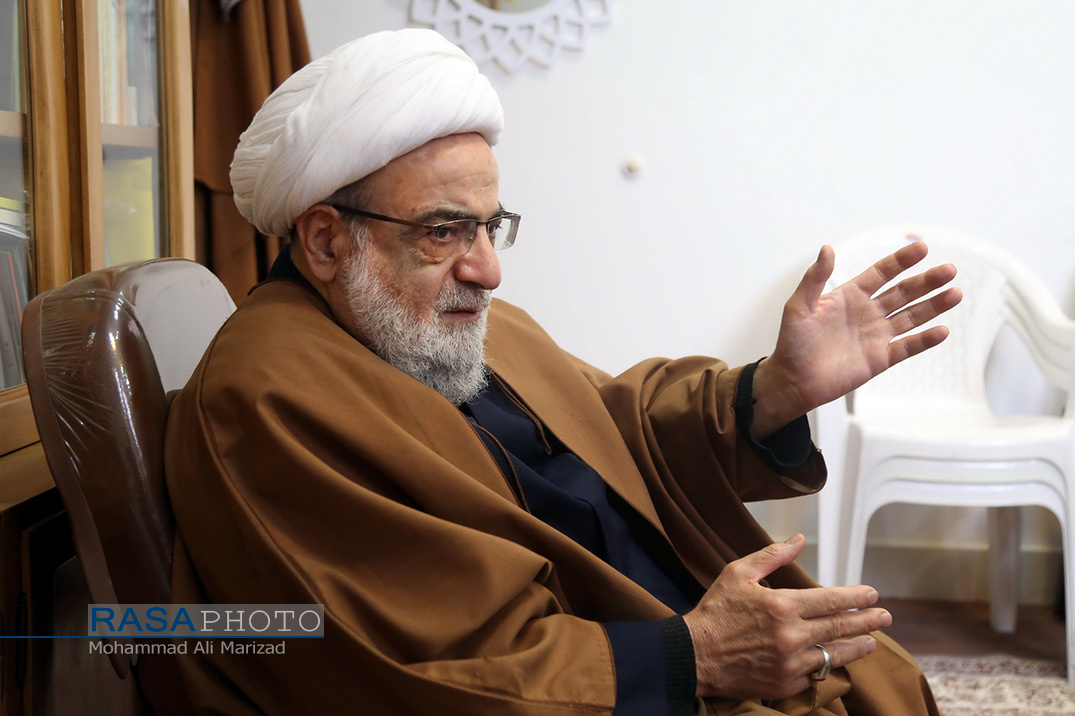 He stated that throughout the history of the Islamic Revolution, our people have proven that they stand for the system, “In different periods, the people have shown that despite the problems, hardships and economic problems, they will not give up their system and will support it.”

Ayatollah Sayyed Jafar Sayyedan:
Participation in the elections will humiliate the enemies

After attending the eleventh session of the Islamic Consultative Assembly and the Interim Parliamentary Assembly of Experts in Khorasan Razavi province, Ayatollah Sayyed Jafar Sayyedan, a lecturer in the Islamic Seminary of Khorasan, said in a speech, “We hope that God Almighty will guide the valuable and resilient people of Iran on the path of the important goals of the Islamic Revolution, will protect the school of the Ahl al-Bayt and will grant its officials success in dealing with the nation and society.” The renowned teacher in the Islamic Seminary said, “The election of the representatives of the people must be such as to lead to the distinction and unity of the nation and to convey this unity to the world because such an election has tremendous value and will humiliate the enemies and will make the allies happy and this movement will lead to unity and oneness.”

Ayatollah Sayyedan noted, “The system of the Islamic Republic of Iran is based on the Shi’ah school of thought and it’s unique in the world and the more this system is honoured, the more it will strengthen all Islam in different dimensions.”

Ayatollah Mortazavi Shahrudi:
The large participation of people in the election strengthens Islam

Ayatollah Mortazavi Shahrudi a great source of emulation of Khorasan province cast his vote in the 11th parliamentary and midterm Assembly of Experts elections. 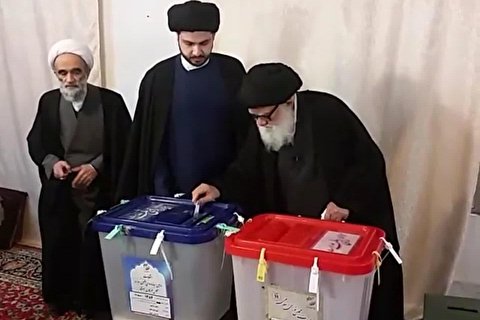 During casting his ballot, his eminence said, “People’s participation in the election should strengthen the Islam and blind the enemies of Iran.” The Iranian scholar stated that voting is an act of worship and said, “With their presence at the ballot box, the believers are seeking the approval of God and the Imam of the Time [Imam al-Mahdi] and respond to the call of the Imam, the martyrs and the Supreme Leader.”

Ayatollah Heydari noted that the people’s presence in the elections was a strong slap in the face for the United States who killed Martyr Qasem Soleymani and said, “On such a day, which is said to be a day of public jihad by Supreme Leader, one must be present at the ballot box.”

He continued, “The presence of the people at the ballot box is a response to the Imam and the Supreme Leader and the foundation for the preparation of the country to elect revolutionary, religious and efficient representatives.”

Ayatollah Mazaheri:
People fervent participation in the elections make the country proud and the enemy disappointed

Ayatollah Mazaheri, a member of the Third Assembly of Experts, cast his ballot in mobile ballot box number 725 in Esfahan.

Casting his ballot his eminence said in a short speech, “By the will of God, the fervent and mass participation of people in today’s election will make the Islamic Republic of Iran proud, people hopeful and the enemies of the nation hopeless.” The 11th parliamentary elections and the midterm elections for the Assembly of Experts – a body whose members designate the country’s Leader – was held in Feb. 21st simultaneously.