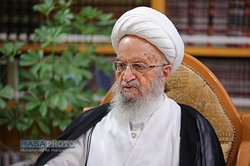 The revered source of emulation warned about the dangers of the internet and propagation ‎of doubts by the enemies and emphasized the use of the capacities of the Islamic ‎Seminaries to deal with these suspicions.‎

RNA – During his meeting with the director-general of the Intelligence Office of Qom ‎Province, Grand Ayatollah Naser Makarem-Shirazi offered his congratulations on the birth ‎anniversary of Lady Fatimah al-Ma’sumah and said, “I hope that with your long history in the ‎field of information and social pathology, you can be a source of good effects in this ‎province.”‎

Referring to the role of Qom as a base for the Shi’ah world, the source of emulation said, ‎‎“This is why the enemies have increased the pressure on this city through cultural, moral and ‎intelligence damage and we must stand up to it.”‎

Ayatollah Makarem-Shirazi warned of the dangers of the internet and the propagation of ‎doubts by the enemies and stressed upon the need to prevent damage and destruction ‎through the internet.‎

His Eminence recommended the maximum use of the power of the Islamic Seminaries of ‎Qom concerning this matter and said, “I hope that by planning and using these capacities, ‎you will achieve this important goal.”‎

At the beginning of the meeting, Hujjat al-Islam Salimi presented a report on the Intelligence ‎Office’s proposed programs for Qom province in accordance with the actions of the enemies ‎in the field of anti-religion, influence and espionage, companionship, cooperation and ‎synergy with the Islamic Seminaries of Qom.‎