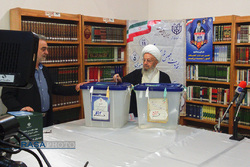 Ayatollah Makarem considered the February 21 as a blessed and landmark day for the Iranian nation and demand all people to participate in the elections.

RNA - Casting his vote in 11th parliamentary and midterm Assembly of Experts elections in mobile ballot box number 563 in Qom, Ayatollah Makarem Shirazi considered the February 21 as a blessed and landmark day for the Iranian nation and demand all people by participating in the elections don’t leave the Islamic republic alone in current hard situation.

Appreciating the hard works of the authorities and officials who held the elections, the source of emulation after casting his vote in a short speech demand people of all walks of life to participate in elections.

“Today is blessed and landmark day for the Iranian Nation. People will add another golden page to their honor book and they let the enemies down.”

“Thanks to God, Iranian nation enjoys intellectual growth and take responsibility for the (Iranian Islamic) system and know they shouldn’t leave alone the Islamic Republic in current harsh situation”, the source of emulation reiterated.