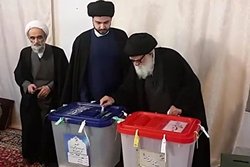 Ayatollah Mortazavi Shahrudi said, “People’s participation in the election should strengthen the Islam and blind the enemies of Iran.”

RNA - Ayatollah Mortazavi Shahrudi a great source of emulation of Khorasan province cast his vote in the 11th parliamentary and midterm Assembly of Experts elections.

During casting his ballot, his eminence said, “People’s participation in the election should strengthen the Islam and blind the enemies of Iran.”