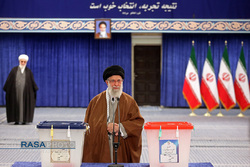 Leader of the Islamic Revolution Ayatollah Seyyed Ali Khamenei says the upcoming parliamentary elections in Iran are taking place at a critical time of US pressure and attempts to drive a wedge between the Iranian nation and government, calling for a large turnout in the polls to foil Washington's “evil intentions.”

RNA - Ayatollah Khamenei made the remarks in a meeting with thousands of people from Iran’s East Azarbaijan Province in Tehran on Tuesday, marking the anniversary of the Tabriz uprising of February 18, 1978.

The Leader called elections a contributor to the strength of the country and said the US formed think tanks of dozens or hundreds of people to plan to alienate the Iranian people and the youth in particular from the government.

He referred to the massive turnout of the people on the 41st anniversary of the Islamic Revolution last Tuesday and in processions to honor Lieutenant General Qassem Soleimani earlier, and said, “The same thing should happen in the elections, meaning that the enemies should see for themselves that, in spite of their persistence in attempting to drive a wedge between the people and the establishment, people receive the elections well, which is reason for pride for the Islamic establishment.”

“Elections neutralize many of the evil intentions that the Americans and the Zionists (Israelis) have in mind against Iran,” Ayatollah Khamenei said. “These elections are the response to the chicanery and deception of Iran’s enemies.”

“Enemies want to know what all of their attempts, the economic difficulties that exist in the country, the perfidy of the Westerners and the Europeans (in the Iran deal matter) toward Iran, and all the pressures — the maximum pressure, as they call it themselves — have finally done to the Iranian people,” the Leader said. “Our friends all over the world, too, are watching with concern to see what happens.”

Iran’s 11th parliamentary elections will be held on February 21, 2020. The date will also feature interim elections for Iran’s Assembly of Experts, which elects and oversees the activities of the Leader of the Islamic Revolution.

Last week, millions of Iranians from all walks of life filled the streets across the country to celebrate the 41st anniversary of the Islamic Revolution. The nation-wide rallies came one month after Iranians held million-strong funeral processions in many cities for General Soleimani, who was assassinated by the US in Iraq on January 3.

Ayatollah Khamenei said the “first-class idiots in the US are once again lining up to say some nonsense about” Iran.

“Partially, what they say is to affect the [turnout in the] elections... to make people despair of the ballot box,” the Leader said.

“The nonsense they speak is also partially to make up for their ineffectiveness,” he added, referring to how the regional tide had turned against America after the assassination of General Soleimani.

“The Americans wanted our dear martyr (General Soleimani), who had a very deep impact on the region, to be taken out so that they could prevail. Things turned out the opposite way.”

Brian Hook, who has been the US’s so-called special representative for Iran, claimed on January 17 that the Iranians would “have little to say” in the elections, which he called a “sham.” Last week, American news and opinion website The Daily Beast reported that Hook held meetings with an associate of the anti-Iran terrorist Mujahedin-e Khalq Organization (MKO) in September 2019 and January this year, before and after General Soleimani’s assassination.

The Leader said the US was the most indebted country in the world — with 22 trillion dollars in national debt — and was merely making itself up to look good.

The Leader said Iran was opposed to no nation or race but only to arrogance and tyranny.

“America has dozens of [military] bases in the countries around ours, but if something happens one day, these bases will be of use neither to America nor to those who give their money to it... because American arrogance is collapsing.”