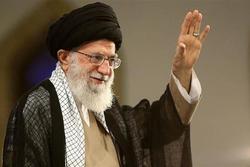 Leader of the Islamic Revolution Ayatollah Seyyed Ali Khamenei has thanked the Iranian nation for its "satisfactory shining in the great election test", saying the country has yet to remain alert against plots by the enemy to harm Iran.

RNA - "In the face of the enemy's conspiracy to hit various pillars of the country, we all need to be vigilant in defense and ready for attack and counterattack," the Leader said Sunday during his regular seminary lectures.

Iranians went to the polls in the country's first general elections since the US imposed sanctions following the pullout from the 2015 nuclear deal and assassinated General Qassem Soleimani.

Ayatollah Khamenei touched on a massive campaign by foreign propaganda agencies to create a negative atmosphere before the elections in Iran.

"This negative campaign started a few months ago and intensified closer to the elections, and in the last two days [up to the election day], their media outlets did not miss the slightest opportunity to discourage people from voting under the pretext of a disease and a virus," the Leader said.

A few Iranian cities are grappling with the novel coronavirus outbreak which has killed six people and infected more than two dozen others, according to health ministry officials. However, normal life goes on as the country begins to wise up to necessary cautionary measures vis-a-vis some alarmist news.

Ayatollah Khamenei thanked God Almighty and deeply appreciated people's participation in the elections despite all the biased propaganda, saying: "God has decided to make this nation victorious."

The Leader said the hostility of the enemies with the Iranian nation is not limited to economic and cultural domains, nor the people's religious and revolutionary beliefs.

"They are even opposed to the elections of the Iranian nation because they do not want the phenomenon of people's turnout at ballot boxes in the name of religion and service to the revolution to be institutionalized as a reality."

Elections in the Islamic system, Ayatollah Khamenei said, nullify the enemies' claim that religion is opposed to freedom and democracy.

"Elections in the Islamic Republic show that religion is the perfect embodiment of an all-inclusive democracy, and 37 elections held in the span of 41 years reflect the Islamic system's unique commitment to democracy," he added.

Ayatollah Khamenei also called on Iranians to discern their enemies and remain vigilant against them.

"In the face of thousands on the enemy front acting against Iran on various issues, millions of people must be ready on the Iranian nation's front to defend, strike and counter-attack in propaganda fields and all sorts of things possible for the nation."

Iran’s principlists are on the brink of a landslide victory in the country’s parliamentary elections as forecasts show them taking more than two-thirds of the seats.

The reformists, the largest grouping in the outgoing parliament, have been decisively beaten, with predictions showing them taking only 17 seats in the 290-strong parliament. The principalists were on course to take around 200 seats, including all 30 seats in the capital, Tehran, previously a stronghold of the reformists.

The result is a rebuff for those who had pushed for greater engagement with the West, which brought about more pressures and sanctions on Iran.

The former mayor of Tehran, Mohammad Bagher Qalibaf, leads the polls in Tehran, putting him in a strong position to take over the parliament’s speakership.

Qalibaf has said only 30% of the country’s economic travails are caused by sanctions, saying mismanagement of the economy is the chief culprit.

Iranian officials say US President Donald Trump has been gripped by a fantasy that the maximum economic pressure is going to lead to the Islamic Republic’s fall. The election results arguably show the establishment’s power has been enhanced, the Guardian wrote on Saturday.

"Many Iranian voters said they would be willing to withstand another six years of sanctions for the sake of their country’s independence,” the British paper added.

Trump raised the stakes in his standoff with Tehran when Iran’s top anti-terror commander, General Soleimani, was assassinated in a US drone strike at Baghdad airport in January.

More than 7,000 candidates competed for 290 seats during Friday’s elections. A second round of parliamentary elections may be held for undecided seats in which candidates have failed to reach the required percentage.

Iranians Determined to Decide Own Fate