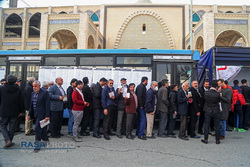 RNA - Speaking to reporters on Friday after visiting the Elections Headquarters, Larijani stressed the importance of protecting and accelerating counting of people's votes, calling on the Guardian Council to closely cooperate with the Interior Ministry in this regard.

Iranians on Friday went to the polls in the country's first general elections since the United States imposed sanctions following the pullout from a 2015 nuclear deal.

Polling stations across the country opened at 8:00 a.m. (0430 GMT) and Leader of the Islamic Revolution Ayatollah Seyyed Ali Khamenei was among the first to cast his ballot.

Voting was extended three times by four hours until 11:30 p.m. local time to allow people to cast ballots in the elections.

Spokesman for the Guardian Council Abbas Ali Kadkhodaei said no "important irregularities" have been reported in the ongoing elections yet, hailing high turnout of people.

He added that the body would continue to oversee the election process even after the votes are counted.

He noted there is no difference between people's participation in this round of elections and the previous one, however, "it increases in some provinces."

According to Press TV, he expressed hope that the next Parliament would make its utmost efforts to solve people's problems.

He added that high turnout of the Iranian people in the elections once again disappointed the enemy and conveyed the message that the enemy cannot undermine national unity even by waging psychological war.

More than 7,000 candidates are competing to enter the parliament. A winning candidate must have at least 20 percent of the votes cast in their constituency in order to become lawmaker for a four-year term.

A total of 57,918,000 people are eligible to cast their ballots. There would be one lawmaker at Majlis per each 190,000-strong segment of the Iranian population.

Iranian Interior Minister Abdolreza Rahmani Fazli said Wednesday that a total of 55,000 polling stations and over 200 constituencies have been prepared across the country’s 31 provinces for the people to cast their votes.