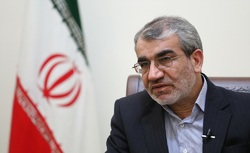 Iran’s Guardian Council, the election supervisory body, says the vetting process for the candidates in the upcoming legislative elections was solely based on law and had nothing to do with the political factions the nominees represent.

RNA - Speaking to reporters in Tehran on Wednesday, Abbas Ali Kadkhodaei, the spokesman for the Guardian Council, dismissed claims that many reformist hopefuls had been disqualified from running in the 11th parliamentary polls scheduled for February 21.

He explained that the disqualifications had nothing to do with the political inclinations of the candidates and that the Guardian Council had done its best to enforce the law.

The council has never sought a political viewpoint in its decision-makings, the spokesman said. “It is only tasked with implementing the law approved by the parliament and disregards political leanings while making decisions.”

Kadkhodaei noted that the Guardian Council does not view the elections as a corporation with political parties as its shareholders.

Asked by a French reporter about the possibility of a voter turnout lower than 50 percent, he said that has not happened in the past and will hopefully not happen this time either.

Iranians will go to polls on Friday to elect lawmakers for a four-year-term at the 290-seat parliament.

Electoral campaigning will end on Thursday, on the eve of the vote. Almost 58 million out of a population of 83 million people are eligible to vote. Nearly three million will be first-time voters.

A second round would take place in April should some seats remain vacant.

Speaking on Tuesday, Leader of the Islamic Revolution Ayatollah Seyyed Ali Khamenei said this week's parliamentary elections take plce at a critical time of US attempts to drive a wedge between the Iranian nation and government.

The Leader also described elections as a contributor to the strength of the country and called for a high turnout to foil Washington's “evil intentions.”