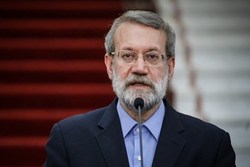 Iranian Parliament Speaker Ali Larijani stressed the importance of people's participation in parliamentary elections in Iran due to the legislative body's key role in the country's decision-making system.

RNA - All important decisions about the lives of the people and future of the country have been approved in the parliament, so it is an important place, Larijani told reporters after casting his vote in the Central city of Qom on Friday.

He emphasized the role of people in elections, and said when the people vote, they not only help national bodies manage the country, but also express their security and political support for the country.

Before the Feb 21 elections, the US and its media outlets tried in vain to make the Iranian people disappointed to put more pressures, Larijani said, adding that they will be compelled to ignore their demands when they witness high turnout of the people in elections.

Today is a good day for the Iranian nation, the speaker noted.

Iranians headed to the polls to elect 290 members of Majlis (the parliament) and 7 members of the Assembly of Experts in its midterm elections on Friday morning.

Voting started at 8 a.m. local time (0430GMT) and will continue till 6 p.m. (1430GMT). Officials will extend the voting time if faced with long ques of voters at the polling stations.

Iranian Interior Minister Abdolreza Rahmani Fazli had announced last Saturday that 54,611 polling stations across the country would open on Friday in 208 electoral regions, saying the ballot papers have been designed with 10 security indices to prevent any fraud.

According to the interior minister, there are 57,918,159 eligible voters in the parliamentary elections on Friday, including around 3 million people eligible to vote for the first time.

Law Enforcement Police forces and (Basij) voluntary forces have been entrusted with establishment of security in different cities and towns during elections hours.

Last Tuesday, Supreme Leader of the Islamic Revolution Ayatollah Seyed Ali Khamenei called on people to go to the polls.

"Elections are a source for strengthening the country. Look at how US propaganda seeks to separate the people from the Islamic system. They create think tanks to plot this. They seek to distance the Iranian youth from the Islamic system, but they won’t succeed," Ayatollah Khamenei said, addressing a large number of Iranian people from East Azarbaijan province in Tehran.

"Iran should become stronger; this frustrates the enemy. One manifestation of strength is having a strong Majlis. The more participation there is in the election, the stronger the Majlis will be. This is one factor for strengthening the Majlis," he continued.

According to Fars News Agency, campaigns officially kicked off in Iran last week by nominees of parliamentary and Assembly of Experts elections.

The election campaigns officially started at 00:00 February 13, and the candidates had one week to win the people’s support for their candidacy.