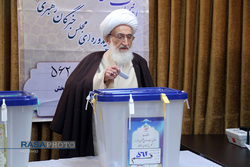 Ayatollah Nouri Hamadani considered protecting and preserving the revolution as a public duty and said that the Iranian people protect and strengthen the country by casting their votes in ballot boxes.

RNA – Casting his vote in the 11th parliamentary and midterm Assembly of Experts elections in Qom, Ayatollah Nouri Hamedani said, “It is imperative to preserve the Islamic republic of Iran and the elections are the manifestation of religious democracy. Iran is the country of the Imam Mahdi and everyone who has faith in the Imam, must participate in the elections.”

“Thanks to God, today, Iranian system is Islamic, which is at the height of power and is based on religious democracy”, the prominent lecturer in the Qom seminary said.

“Iranian pious people have passed great experiments and today they should participate in elections and cast their votes. Our duty is to preserve this Islamic, religious and democratic system until the Reappearance of Imam al-Mahdi”, the source of the emulation added.

“It is necessary for all people to participate in the elections and strengthen their country (Islamic Republic of Iran)”, his eminence stated.