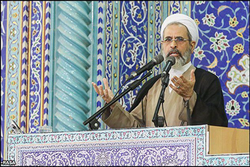 Ayatollah Arafi considered the presence of the maximum number of people in the elections as ensuring the authority and greatness of the Iranian nation and said, “Even one vote more by the people pushes the enemies back and a one percent increase in participation increases our security and authority.”

RNA – In his Friday prayer sermon to a large and fervent crowd of believers at ‎Qom’s ‎Qods ‎‎‎‎‎‎‎‎Prayer Hall, Ayatollah Alireza Arafi referred to the 22 Bahman [11 February] rallies and said, “We thank the Iranian people and the honourable people of Qom for their passionate participation in the 22 Bahman rallies and in the commemoration programs for Haj Qasem Soleymani because the Iranian people gave the best response to the test.”

Referring to today’s legislative elections, he said, “Today, we are in the midst of a great divine experiment, a very important act of worship and a revolutionary duty. Today, the 37th election of the Islamic system is taking place and nowhere in the world has a revolution like this stood in the way of the people’s votes and the holding of elections.”

The jurisprudent member of the Guardian Council added, “The presence of the maximum number of people in the elections ensures the authority and greatness of the Iranian nation and even one vote more by the people pushes the enemies back and a one percent increase in participation increases our security and authority. Participation in the elections is a great act of divine worship and an important divine and revolutionary duty.”

He continued, “The enemies must know that just as the people passionately participated in the funeral of Haj Qasem and 22 Bahman rallies, they will continue to disappoint the enemies through their presence.”

Ayatollah Arafi referred to the discovery of the Novel Coronavirus in Qom and said, “We must consider cleanliness and health care as important and follow the rules of the matter. All of these issues must make us aware of God and we must not be negligent toward paying attention and resorting to God Almighty because it’s effective in all aspects of life.”

He added, “We must avoid magnifying and creating fear. We have to be careful not to panic and scare society and we hope God keeps all tribulations away from our nation.”