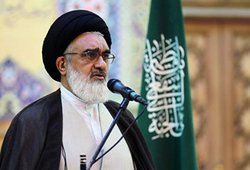 Ayatollah Sa’idi emphasized that the struggle against corruption requires the efficiency of the ‎faithful, committed and non-aligned youth and stressed that those who are attached to the ‎West have no favour for the country and the people.‎

RNA – In the first Friday prayer sermon since the outbreak of COVID-19 (Coronavirus), ‎‎‎‎Ayatollah Sayyed Mohammad Sa’idi spoke to a large and fervent crowd of believers at ‎‎‎‎‎‎‎‎‎‎‎‎‎‎Qom’s Qods Prayer Hall and offered his congratulations on the birth anniversary of Lady ‎Fatimah al-Ma’sumah.‎

The custodian of the Holy Shrine of Lady Fatimah al-Ma’sumah stating that assisting others is ‎an important element of Islamic society, said, “To counter the Coronavirus, the people ‎formed jihadi groups to help the needy and the sick. We thank all those who helped the ‎economically disadvantaged, the sick and the needy and provided for the dead in the fight ‎against the Coronavirus and we appreciate the philanthropists, the medical staff and the ‎nurses.”‎

In the second sermon, he expressed his condolences on the death of Ayatollah Ebrahim ‎Amini, Ayatollah Sayyed Ja’far Karimi and other prominent figures in recent months and ‎wished for God’s forgiveness for the deceased.‎

Ayatollah Sa’idi commemorated the 7th of Tir bombing [which occurred June 28, 1981], the ‎anniversary of the martyrdom of Ayatollah Sayyed Mohammad Hoseyni-Beheshti and 72 ‎companions of Imam Khomeyni and said, “An influential hypocrite set off a bomb in the ‎headquarters of the Islamic Republican Party and these personalities were martyred.”‎

The representative of the Supreme Leader in ‎Qom praised Ayatollah Ebrahim Raeisi, the ‎Chief Justice of Iran, for his hard work and his fight against corruption, saying, “Corruption, ‎especially in the economic field, is one of the crimes that isn’t related to a specific area and ‎must be dealt with decisively and the method of dealing with corruption is important.”‎

His Eminence emphasized that the struggle against corruption requires the efficiency of the ‎faithful, committed and non-aligned youth and stressed that those who are attached to the ‎West have no favour for the country and the people.‎

He emphasized that it doesn’t matter if the corruption is political, economic, moral, cultural, ‎personal, or factional – it must be countered and the government, with the help of the ‎people, must take a radical, logical, serious, broad, intense approach, without discrimination ‎and considerations to heal the government from corruption and to gain the trust and ‎satisfaction of the people.‎

Ayatollah Sa’idi added, “All praise be to God, with the relative improvement of Qom, the ‎doors of the Holy Shrine of Lady Fatimah al-Ma’sumah have been opened. Undoubtedly, the ‎situation will improve with better and further observance by the people. We hope that the ‎Coronavirus will be eradicated as soon as possible.”‎