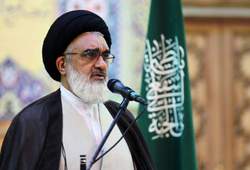 Ayatollah Sa’idi said, “The slap against the Ayn al-Asad Airbase was a message of authority, dignity and greatness of the system, wilayah (guardianship), the people and the armed forces and a defeat of the flimsy dignity of the American security forces in the region.”

RNA – In his Friday prayer sermon delivered to a large and fervent crowd of believers ‎‎‎at ‎‎‎‎‎‎‎‎‎‎‎‎‎Qom’s Qods Prayer Hall, Ayatollah Sayyed Mohammad Sa’idi referred to the attack by the Islamic Revolutionary Guard Corps (IRGC) on the American-controlled Ayn al-Asad Airbase in Iraq following the assassination of General Qasem Soleymani on January 8th and said, “The attack by the IRGC defeated the flimsy dignity of the United States.”

The custodian of the Holy Shrine of Lady Fatimah al-Ma’sumah said that the downing of Ukraine International Airlines Flight 752 brought sadness to the Iranian people after and said, “The Iranian people have demonstrated their insight, patience and intelligence to the enemies by magnificently attending the funerals of these valuable martyrs, sympathizing with the families of the tragedy and appreciating these heroes of aerospace.”

Referring to the incident of the crash of the Ukrainian airplane, he said, “In a statement by the General Staff of the Armed Forces and in a subsequent transparent and explicit interview, [Brigadier General Amir-Ali Hajizadeh] the commander of the Aerospace Force of the IRGC demonstrated that on the basis of the guidance of the Supreme Leader of the Islamic Revolution [Ayatollah Khamenei] that the system of the Islamic Republic accepted the human error with due diligence, openness and respect for the military and government and thanks to divine favour, the issue of the Ukrainian airplane will eventually benefit the system.”

Ayatollah Sa’idi emphasized that Brigadier General Hajizadeh and Major General Hoseyn Salami
[the Commander-in-Chief of the Army of the Guardians of the Islamic Revolution] wished for death due to the extreme devotion and sadness of the people over the plane crash and said, “These IRGC commanders lost their honour but before this incident, the United States and other countries committed tragic acts but remained silent.”

The representative of the Supreme Leader of the Islamic Revolution in ‎Qom said, “When the criminal United States deliberately and intentionally shot down an Iranian passenger plane [Iran Air Flight 655] with a missile and martyred many people, they gave the warfare coordinator on duty the Navy Commendation Medal.”

Regarding the harsh revenge of the Islamic Republic of Iran following the martyrdom of Haj Qasem Soleymani and his companions, he said, “The slap against the Ayn al-Asad Airbase was a message of authority, dignity and greatness of the system, wilayah (guardianship), the people and the armed forces and a defeat of the flimsy dignity of the American security forces in the region.”

Ayatollah Sa’idi concluded by saying that the United States, Saudi Arabia and the United Arab Emirates have been plotting for several years to disrupt the relationship between Iran and Iraq, and said, “Haj Qasem and Abu Mahdi al-Muhandis were martyred in one operation and the issue increased the familiarity, friendship and unity between the two countries and thwarted the conspiracies of the hypocrites and the United States in the region.”