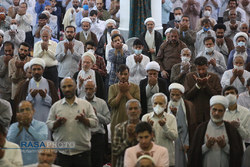 Friday prayers have resumed in cities throughout Iran after a four-month hiatus due to the ‎COVID-19 outbreak.‎

RNA – Hujjat al-Islam Habib Sha’bani, in his Friday prayer sermon in Hamadan, stated, ‎‎“It has been more than four months since Friday prayers were cancelled in Hamadan and ‎other provinces due to the outbreak of the Coronavirus at the discretion of the authorities. ‎During this period, many social groups, religious delegations, etc., put forward their utmost ‎efforts to fight against this vicious virus and the efforts of these loved ones are ‎commendable for all of us.” ‎

The representative of the Supreme Leader of the Islamic Revolution in Hamadan province ‎added, “Fortunately, today we are witnessing Friday prayers in Hamadan and several other ‎cities in the province and therefore, we ask other esteemed compatriots to try to get rid of ‎this disease as soon as possible by observing health protocols.”‎

Hujjat al-Islam Abolqasem Ya’qoubi, in his Friday prayer sermon in Bojnourd, spoke in ‎honour of the anniversary of the martyrdom of Shahid Ayatollah Mohammad Hoseyni-‎Beheshti and 72 of the supporters of the Islamic Revolution, saying, “On the 7th of Tir [June ‎‎28, 1981] a severe blow was dealt to the body of our system in such a way that if it weren’t ‎for the Imam [Khomeyni] and the focus of religious leadership and the Supreme Leader, this ‎blow would have been enough to bring about the downfall of the country but the late Imam ‎calmed the people with just one ‘Indeed we belong to God and to Him do we indeed ‎return.’”‎

The representative of the Supreme Leader of the Islamic Revolution in North Khorasan ‎province stated, “Our revolution doesn’t believe in individuals, but has a monotheistic basis, ‎and people don’t get heartbroken when individuals abandon the revolution. In other words, ‎the blood of these greats isn’t less than their lives and it has an impact on the process of ‎society.”‎

Hujjat al-Islam Abbas-Ali Jirani, in his Friday prayer sermon in Damghan, referred to the ‎American Human Rights Review and Disclosure Week and called the gesture of defending ‎human rights by American government officials and their allies as “ridiculous and funny” and ‎added, “Can a country which has carried out more than 100 wars, military attacks, coup ‎d’états and violations in other countries in the last century and killed millions of innocent ‎people be a human rights defender?”‎

He added, “This state and the ruling regime, which treats its people in this manner, wherever ‎crime, aggression and war take place on the planet, plays a direct or indirect role. It’s a ‎symbol of oppression, child murder and the violation of the rights of people. Its crimes over ‎the last century in West Asia have claimed the lives of millions of Muslims. Now they are ‎talking about human rights – a claim that is unbelievable to anyone with common sense.”‎

Hujjat al-Islam Sayyed Ahmad-Reza Shahrokhi, in his Friday prayer sermon in ‎Khorramabad, stated that the roadmap of the Islamic Republic is based on Islamic principles ‎and noted, said, “The basic principles of Imam Khomeyni and his policies on economic ‎principles and the internal and external administration of the country have been recorded in ‎his Sahifeh-ye Nour and written in his divine political will, which should be given special ‎attention.”‎

Hujjat al-Islam Mohammad-Ali Nekounam, in his Friday prayer sermon in Shahrekord, ‎referred to the events which occurred during the month of Tir, including the failed ‎assassination of the Supreme Leader of the Islamic Revolution on June 27, 1981, and the ‎martyrdom of Ayatollah Beheshti and his companions on June 28, 1981, as well as the ‎martyrdom of Ayatollah Mohammad Sadouqi on July 2, 1982, and said, “All of this was done ‎by the hypocritical group [People’s Mujahedin of Iran] with the direct support of the ‎bloodthirsty United States and these crimes will never be erased from the memory of the ‎Iranian nation.”‎

The representative of the Supreme Leader of the Islamic Revolution in Chaharmahal and ‎Bakhtiari province referred to the 17,000 martyrs who were the victims of assassination ‎attacks carried out in the country by the criminal United States and stated, “These crimes ‎showed that American human rights can no longer be beautified for anyone. Today, ‎American human rights demonstrate their nature well and no one can justify them.”‎