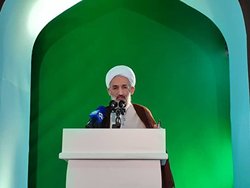 Hujjat al-Islam Mohammadi-Laeini said that racial discrimination in the West and the United ‎States has been systematic and institutionalized and added, “The shout of ‘down with ‎America’ has also been heard throughout the Western world.”‎

RNA – In his first Friday prayer sermon since COVID-19 (Coronavirus) entered Iran, Hujjat al-‎Islam Mohammad-Baqer Mohammadi-Laeini, the representative of the ‎Supreme Leader of ‎the Islamic Revolution in Mazandaran province, ‎said, “If we want to continue the path of the ‎martyrs, the late Imam [Khomeyni] and the Islamic Resistance, God must be with us and if ‎we want God to be with us, we must be pious, as God Himself has said, ‘I am with those ‎who are pious.’”‎
‎ ‎
The Friday prayer leader of Sari referred to the important message of the Supreme Leader ‎‎[Ayatollah Khamenei] on the occasion of the inauguration of the 11th Islamic Consultative ‎Assembly and said, “The executive branch, the judiciary, as well as other officials in various ‎parts of the country must work to fulfill the slogan of the year [‘Leap in Production’].”‎
‎ ‎
Hujjat al-Islam Mohammadi-Laeini also mentioned the holding of many meetings via video ‎conferencing software due to the outbreak of the Coronavirus and said, “The Coronavirus ‎has created an opportunity for us to move towards e-government and this important issue ‎should be taken into consideration.”‎
‎ ‎
His Eminence referred to the protests in the United States that erupted after the killing of ‎George Floyd, an African-American man, on May 25 and said that in some countries, in ‎addition to the Coronavirus, another disaster, namely racial discrimination, has led to the ‎deaths of many people and emphasized, “They dealt ruthlessly with African-Americans and ‎people of colour and there has been a wave of protests against such inhumane practices in ‎all Western countries and the United States.”‎

He stated that racial discrimination in the West and the United States has become systematic ‎and institutionalized and explained, “Today, the wave of popular protests in the Western ‎world against imperialism and the Western regime is louder than in any other country in the ‎world.”‎