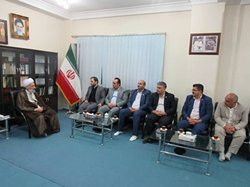 Hujjat al-Islam Mohammadi-Laeini said that this year, 22 Bahman will be the scene of the creation of an epic by the Iranian people and said, “This great epic will be another firm response to the enemies and opponents of the Islamic Revolution.”

Hujjat al-Islam Mohammadi-Laeini considered the existence of a revolutionary vision and jihadi management as the most important reasons for the country’s progress in the last four decades and added, “Today, the way to reach the summit of progress in our country is through the same thinking of the first days of the revolution.”

His Eminence emphasized that the enemies have done everything in their power against the Islamic Revolution and the great Iranian people in the last forty years and said, “But the vigilance and insight that exemplify this example always been a strong response to the enemies’ conspiracies against this religious system.”

He pointing out that the Islamic Revolution with great popular backing has become an absolute regional power and remarked, “The enemies can’t understand and tolerate this authority and greatness of the Iranian nation and therefore, they use every opportunity to harm the revolution.”

Hujjat al-Islam Mohammadi-Laeini added that despite all of the enemies’ conspiracies against the great nation of Iran, this year, the people will create another unparalleled and lasting epic on 22 Bahman [11 February] and noted, “This great epic will be another firm response to the enemies and opponents of the Islamic Revolution and the system.”