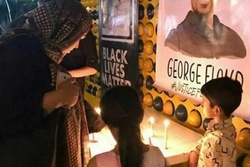 The Iranian Foreign Ministry has strongly denounces rampant bloodshed of African-‎Americans in the United States and the country’s suppression of the protests that have ‎followed the recent grisly murder of a black man by a white police officer in Minneapolis.‎

RNA – The Iranian Foreign Ministry has strongly denounces rampant bloodshed of African-‎Americans in the United States and the country’s suppression of the protests that have ‎followed the recent grisly murder of a black man by a white police officer in Minneapolis.‎

‎“Iran regrets the tragic murder of black Americans, denounces deadly racial profiling in the ‎United States & urges authorities to do justice for every case,” the ministry said in a tweet ‎on Friday.‎

The condemnation came three days after disturbing footage surfaced online showing the ‎police officer, Derek Chauvin, choking unarmed George Floyd to death after forcing him to ‎the ground and pinning him down with his knee.‎

The officer refused to relieve the pressure, although Floyd was being heard repeatedly ‎pleading for his life and saying, “I can’t breathe.”‎

The officers had been called to the scene -- a Cup Foods’ store on the 3700 block of ‎Chicago Avenue South -- after the African-American victim was reported to be attempting to ‎use forged documents.‎

Police spokesperson John Elders claimed that Floyd had resisted arrest, and also alleged that ‎he had started “going into medical distress” after the officers forced him into handcuffs. The ‎viral footage, however, came to clearly disprove the account.‎

Floyd’s death, a poignant reminder of repeated unjustifiable killings of members of the ‎African-American community by the US police, has been followed by protests across the ‎country. ‎

The Foreign Ministry’s tweet incorporated an intercut of videos showing the police ‎confronting the protesters, protesters running away from police violence, and demonstrators ‎setting the US flag on fire.‎

Rallies have turned violent in Los Angeles and Minneapolis, where the police have fired tear ‎gas and rubber bullets against the demonstrators.‎

On Thursday, protesters set on fire a Minneapolis police station in a third straight night of ‎mass protests.‎

Minnesota Governor Tim Walz has activated the National Guard to reinforce the measures ‎that are being used by the police in the face of the protests.‎

More than 500 guard members were activated and sent to Minneapolis and several ‎surrounding cities. It was the first time the Minnesota National Guard has been activated for ‎a civil disturbance in 34 years.‎

The Iranian Foreign Ministry said, “The protesters' voice must be heard. In doing so, ‎suppressing the suffering Americans & press freedom must URGENTLY be stopped.”‎

Earlier, Ministry Spokesman Abbas Mousavi had also said that the “brutal killing” of Floyd “in ‎cold blood” was “a harrowing demonstration of systematic racism and white supremacism.”‎

He had regretted that such racism and white supremacy that has enabled Floyd’s murder ‎were being “glorified by the current [US] administration.”‎